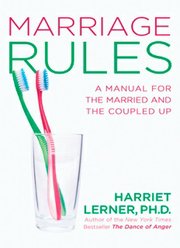 “Marriage Rules: A Manual for the Married and Coupled Up” by Lawrence author Harriet Lerner

Lerner will be at the Raven at 7 p.m. Wednesday to talk about “Marriage Rules: A Manual for the Married and Coupled Up.” There will also be time for Q&A as well as a book signing. 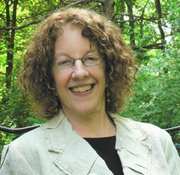 Clinical psychologist, best-selling author and relationship expert Harriet Lerner, of Lawrence, has just released her 11th book, “Marriage Rules: A Manual for the Married and Coupled Up” (Gotham Books, 2012).

And just as its title suggests, the compact book teaches readers how to stay connected to their partners. How to navigate this most intimate and complicated of relationships, giving the best of ourselves without sacrificing our core values, beliefs and priorities.

Lerner got the idea for her marriage manual from food writer Michael Pollan’s book “Food Rules.”

“He has 64 healthful rules for living that are really clever and fun,” says Lerner. “Rules like, ‘Don’t buy cereal that changes the color of the milk.’ While reading his book, I got inspired to do the same for the married and coupled up.

“I wanted to write a book that distills the endless theories about relationships into useful ‘how-to’s,’” says Lerner. “Couples are operating in a time famine. People under stress don’t need to plow through theories. They need a user-friendly format, a book they can just jump into.”

Her simple idea turned into a more complicated endeavor than she expected, with the book taking 14 months to complete.

“Next to my first book, ‘Dance of Anger,’ this was the most difficult,” she says. “It was a challenge to write so many rules without making the reader feel pummeled.”

Like her earlier works, Lerner succeeds in injecting humor into the text, organizing the 106 rules under 10 broader, more general topics such as:

There’s also the chapter, “Dial Down the Criticism,” dedicated to those who want to believe that their criticism of their partner is merely helpful advice: “Get bite marks on your tongue,” says Lerner.

“If you take away just one thing from this book, let it be this,” she writes on page 24. “No one can survive a marriage (at least not happily) if they feel more judged than admired.”

Also helpful is Rule No. 10: Be The One To Change First.

“You are the only person you can change,” she writes. “If you want a recipe for relationship failure, just wait for the other person to change first.”

Since the book’s release earlier this year, she has heard from couples already benefitting from the wisdom she has accumulated through her 40-plus years as a therapist, and decades-long marriage to husband, Steve, who has a starring role in some of the rules.

“Some couples are choosing one rule that they each want their partner to follow for one month,” says Lerner. “Taking the suggestions one at a time is very helpful because when people try to change too much too fast, it usually doesn’t work.”

She also notes that “Marriage Rules” can be read just one person.

“While it takes two to couple up, it takes only one person to make things a whole lot better,” she says.

But couples experiencing stress aren’t the only ones who will benefit from Lerner’s manual.

“No marriage is perfect,” she says. “Most of us enter marriage brimming with optimism and good will, but real life is messy and complicated, and paradoxically, it is in our most intimate relationships that we are the least likely to be our most mature selves.”