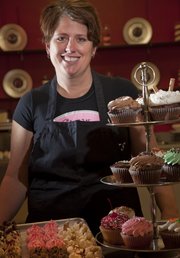 Allyson Fiander is the owner of Billy Vanilly Cupcakes, 914 Mass. Fiander has appeared on "Cupcake Wars" and won awards as a small-business entrepreneur.

These little "preemies" give a Billy Vanilly customers a chance to sample a few of the bakery's flavors or just pick up a tiny treat.

Billy Vanilly's Allyson Fiander competed in the very first episode of The Food Network's "Cupcake Wars" while still working under the store name of Daddy Cakes.

Hers is a trade that can fix a bad day, be the icing on the cake of a good one or simply provide a treat, no reason needed.

Fiander is the owner of the first-ever cupcake bakery in Kansas: the Topeka-based Daddy Cakes, which opened in 2007. Nearly five years later, Fiander’s store has a new name, Billy Vanilly, and a second location, right here in Lawrence, in the old Campus Cloth space at 914 Mass.

It’s hard to believe the old-fashioned soda-fountain-type space used to hold pricey jeans and distressed hoodies, but it did. Now, instead, it’s got bistro tables, fluffy pink paint, three sizes of cupcakes with their own special names: preemies (mini), babies (standard) and big kids (jumbo). The cakes come lined up in the same press-your-face-to-the-glass way of an ice cream shop, vivid colors hitting your eyes just as the heavenly smells hit your nose. And the flavors? The twists of taste and beauty are as basic as they are gourmet, from 24 Carrot (carrot cake) to The Retro ( a la Hostess) to the namesake Billy Vanilly (vanilla cake and buttercream with sprinkles and a cherry).

On the cusp of a trend

Fiander didn’t start out thinking she’d become a cupcake baroness, but she did know she wanted to feed the world sweets. And she knew that right away, almost as soon as she was put to work in her family’s California eatery.

“Our grandparents were restaurateurs, and even by 9 or 10 they would put me to work in the kitchen, so the number of years experience I have is kind of scary and makes me sound very old,” she says, of the Hollywood banquet hall her grandparents ran, which served Cary Grant and Lucille Ball before her time. “But the neat thing is that I realized really early on that I love it. ... And I think it’s such a blessing to know what you want to do with your life and what you love doing. And for me, I love baking, I love being in a kitchen, and I get to make money at it and provide jobs for people and teach them what I know.”

She trained as a pastry chef in France, spending a decade there before landing in Kansas, working at The American Restaurant in Kansas City before opening up a French bakery and cafe, Boulangerie Philippe, in Prairie Village.

But upon moving to Topeka, she sold her shop and rooted around for what exactly she’d want to do in her new town.

“I was kind of just tossing around all these ideas and a family member sent me an article about a cupcake store that had opened in her town, and I had recently come back from a vacation in California and had seen this line around the block at Sprinkles. And I’m like, ‘What’s Sprinkles? And why are people standing in line to get this stuff?’” she says of the bakery, which is known as the United States’ first cupcake-only bakery. “I’m a West Coaster and I have lived in France and for the past 10 years, but here I am in the Midwest and cupcakes seemed like the right move.”

Ditching her previous ideas, Fiander put her credit and experience on the line, figuring out a store-front model that could allow her to sell retail, do catering and make speciality cakes. Soon after opening, Fiander had her own eager customers and a growing staff, with lines around the block.

“In the first three weeks of being open, I just knew this was going to be as big as I could get it,” she says. “We had lines around our building every morning. People would just show up and stand in line to get the cupcakes. And ever since, it’s been kind of this game of playing catch-up. Can we make enough cupcakes for them?”

But it did get bigger, with a single phone call.

“They called in the afternoon when I had already left, and so I had these high school girls that would come in, and I guess one of them took a message saying, ‘The Food Network called. Would you be interested in being on a show?’” she says, laughing. “And I was like, ‘This would be a great reason to call me at home.’”

The network tapped Fiander and Daddy Cakes to appear on the premiere episode of a brand new show: “Cupcake Wars.” The competition was stiff, especially because none of the chefs knew what to expect from “Wars,” which is now in its fourth season. It turned out, the four chefs were to make Sea World-inspired cupcakes in three rounds, with a player being eliminated in each round. Fiander and her brother, Phil Burns, were knocked out in the middle round, but Fiander says she’d do it again, no question.

“Absolutely, in a heartbeat. Not so much because of the exposure, which was great for business,” she says, adding that she’s had customers travel from states away after seeing the episode. “But really I’m very competitive, and I’m very proud of our cupcakes, and I would go on that show because I know that I should’ve won and I could win, and so I’d go back just to do it again with a little bit more knowledge on what that show is about.”

But Fiander doesn’t need a stint on the show to keep her busy, owning two stores has proved to be work enough. She spends each morning mixing batter and decorating cupcakes at the Topeka Billy Vanilly before heading to the Lawrence store to check in a few times per week. Because of the amount of time it took to change the Campus Cloth space into a bakery (the stoves are where the dressing rooms were, bathrooms were added, the flooring ripped out), new Lawrence employees were able to work for an extended period in the Topeka store, something that helps put the very hands-on Fiander at ease.

“I’ve been really fortunate that (they) got to pre-train here quite a bit. But it is hard. I’m not going to lie. It is hard because I invest so much of myself in the store every day, I find that I need to be in Lawrence a lot,” says Fiander, whose Topeka store won a Kansas Department of Commerce 2010 Women-Owned Business of the Year award. “I need to be out at that Lawrence store and kind of share with them my passion and how everything is to be done. To be honest, it is more of a struggle than I originally thought. But, our plan has always been to franchise.”

The Lawrence operation has meant that between the two stores Fiander has created 30 jobs and produces thousands of cupcakes per day. Lawrence employee Amber Muñoz says she recognizes customers she’s been serving since starting with Fiander in the very beginning in Topeka. Having worked under Fiander for five years, she says she’s not surprised to already have “regulars” coming into the new location. Nor is she surprised at what the most popular flavor seems to be.

“I think the favorite is Billy Vanilly, though,” she says. “A lot of kids like it because it has a cherry.”

hey sarah thanks for the yummy-looking photos and for covering the cupcake shop opening!!