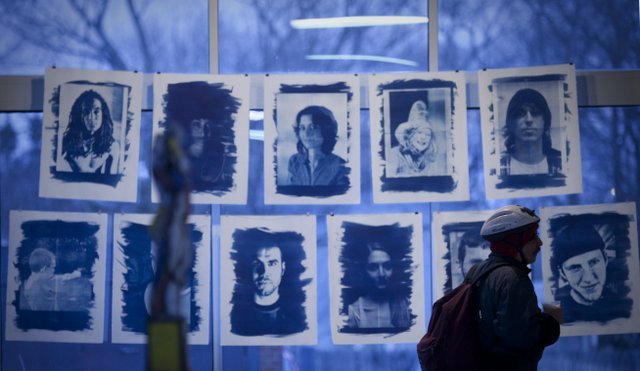 Lawrence resident Douglas Underwood walks by a display of photographs during a First Friday event in downtown Lawrence. Organizers of the event are now envisioning a new full-time city position that would promote the arts and work to bring “creative industries” to the city.

Final Fridays may just be the beginning.

Organizers of the year-and-a-half-old monthly arts event in downtown Lawrence are now envisioning a new full-time city position that would promote the arts and work to bring “creative industries” to the city.

“The results have been more positive than even we expected,” said Eric Kirkendall, an organizer of the Final Fridays event, and a co-author of a study that attempts to quantify the economic impact of the event. “Our recommendations going forward really are focused on the city considering the cultural arts and creativity as a major part of their economic development strategy.”

The study included results from a survey that attempted to quantify the economic impacts from November’s Final Fridays event, which featured various gallery shows and performances. Among the findings were:

• A team of volunteers counted about 2,700 visitors who attended various art venues as part of the Final Fridays event.

• A random survey of 191 people found that visitors planned to spend about $31 per person as part of the event, with the bulk of the spending on souvenirs/gifts and meals and refreshments.

• Using the survey results, the study estimates that the November event generated about $80,000 in spending for the community.

• Businesses were mixed on how they believed the event affected their sales. Of the 24 businesses that responded to a Downtown Lawrence Inc. survey, seven reported that Final Fridays resulted in an increase in sales. The majority of businesses, however, said they did not think the event affected their sales. In addition, seven art galleries reported art sales of just more than $6,000 at the November event.

Kirkendall said arts supporters likely will lobby the City Commission this summer for funding to create a new city arts position. Kirkendall said he doesn’t yet have an estimate on how much the city would need to invest in the position.

But he said the idea has been used in other comparable cities. He said Fort Collins, Colo., Bloomington, Ind., and Chapel Hill, N.C., all have city positions devoted to arts or cultural development.

Kirkendall said any position in Lawrence should go beyond just organizing and promoting arts events. He said a new position also would market Lawrence to businesses that rely on creativity. He said such businesses could include firms in the sciences, architecture, advertising, engineering and other similar fields.

“I think the key to success in the future is for Lawrence to become part of a creative hub,” Kirkendall said. “We think a fairly modest investment could pay huge dividends in the long run.”

City funding for any new position likely will be tight in the 2013 budget, but City Commissioner Hugh Carter said he wants to study the idea further.

He said a more detailed plan about how a new position could “leverage the city’s arts culture” is needed before he could commit to a new City Hall post.

But Carter said he agrees with the idea that the arts and “creative industries” can be a larger part of the city’s economic development efforts.

“We have some real resources here, and I can definitely see how some coordination of efforts could be a big part of being successful,” Carter said. Kirkendall said the Lawrence Cultural Arts Commission likely will request a study session with the City Commission later this year. In the meantime, Final Friday organizers will explore ways to better market the event and create some events on Saturdays in order to give out-of-town art aficionados more of an incentive to stay overnight in the city.