Until the day we’re all born with superpowers we can’t be two places at once. But when something as powerful as a hurricane uproots a family, the heart can reside back home while residence is taken up in a new spot on the map. 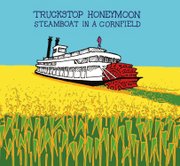 Truckstop Honeymoon's newest album is called "Steamboat in a Cornfield."

Lawrence-based bluegrass-vaudevillian-cowpunk duo Truckstop Honeymoon proudly wears its duality on its sleeve on its latest “Steamboat in a Cornfield,” its eighth album. The New Orleans natives moved to Lawrence after Hurricane Katrina in 2005 and sing about their love and longing for their southern home while coming to love their new digs, all over the top of their usual banjo, bass made from wash tubs and jazzy, muted trombone.

Husband and wife duo Mike West and Katie Euliss kick off with their overflowing charisma right away with “Play Along,” a good-natured tune that cuts to the heart of any successful relationship. While they see each other’s faults as plain as day, they overlook ‘em and they both know it. They love it when the other plays along.

Of course sometimes it’s not so easy to just let your mate’s foibles go unnoticed, as West points out in “Your Mother is a Sociopath.” The dark subject matter is accompanied by a deceptively upbeat rhythm, the strings moving things along at a joyful pace, all while West sells the story of his kids’ crazy mother so well you wonder if he just might be telling the truth.

West and Euliss aren’t out to just scare their four kids, though, and even dispense some parental advice. On “The Key,” they tackle the time-honored tradition of the “what you want to be when you grow up” talk. Their guitar, bass and banjo slowly weave their way around each other as they trade advice about honorable, if “traditional,” occupational options such as an architect or civil engineer. However, they let their progeny know, that even if the business community may scoff at the notion, one could do much worse than making a career in music. You don’t have to own a mansion to live in luxury, they sing in the chorus, as long as you can sing your way in the door, you already hold the key.

Like their beloved Kansas and Louisiana, West and Euliss each have their unique traits, as evidenced by their writing. While West’s humor shines through in his songs about parenting and love unspoiled by craziness, Euliss openly explores her homesickness. Her songs “On the Prairie Now” and “Going Back to Louisiana” convey a heartfelt appreciation of home and a nearly-palpable sense of longing for what used to be home.

That’s not to say Euliss is without humor. She penned the disc’s most rockin’ number “Grateful Dead Show.” While they go electric, she sings of a male acquaintance who loved the Dead as much as she did, but had different ideas on how the rest of their relationship should go. It couldn’t have helped his self esteem to know getting high and watching “The Wall” again was preferable to friendlier escapades.

“Steamboat in a Cornfield’s” title was borrowed from the John Hartford book of the same name. Like the flood that washed them away from Louisiana, the book tells the story of a flood that carried a steamboat from a river and stranded it in a farmer’s field. But while Mother Nature taketh away, she also giveth inspiration. In this case, the ability to bring New Orleans, it’s Cajun jazz, vaudevillian horns and good times and plant them right in the middle of the map.