What: A collection of metal pieces meant to create discussion about the open and closed postures we use as human beings to express ourselves. 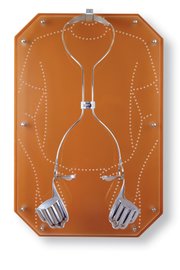 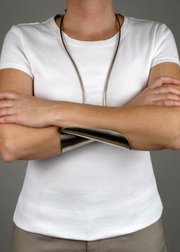 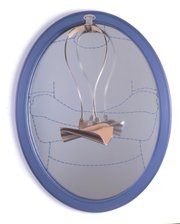 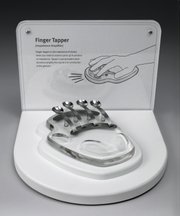 Artist Jennifer Crupi's work will be on display at the Lawrence Art Center from Jan. 20 to March 8 in an exhibition entitled "The Articulate Body."

Posture is more than just something your mother complained that you didn’t do well enough: It’s a window into how we treat each other.

Posture equals body language, and, no matter how you say it, it says something about you and those around you.

To Jennifer Crupi, that’s an intriguing concept — one worth exploration, acknowledgment and discussion.

A New Jersey-based artist and professor, Crupi has spent a career using her metalsmithing work to make a point about how we express ourselves.

Her art went on display Friday at the Lawrence Arts Center, 940 N.H., and a reception will be held from 5 p.m. to 9 p.m. Jan. 27 as part of Final Fridays. The Kean University professor’s solo exhibit, entitled “The Articulate Body,” will be shown until March 8.

For example, “Guarded Gestures, #2” is a piece of shiny sterling silver meant to loop around the wearer’s neck and fall in such a way that two supports can be used to cross one’s arms protectively over his or her chest. Meanwhile, “Unguarded Gestures, #1” also loops around the neck but is designed to mobilize the hands in front of the body in such a way that it’s as if the wearer had tucked their thumbs in the front pockets of their jeans in an open and friendly way.

There’s something both ancient and futuristic about the works in the manner they display humanity. Ben Ahlvers, exhibition program director at the Lawrence Arts Center, says it’s precisely that unusual mix and simple beauty that attracted the center to showing Crupi’s work.

“Her work is beautiful and it’s very intriguing. It sort of teeters on this sort of medical-equipment-looking (design). It’s sort of a curiosity on one level, but when you dig a little deeper and get to what it is she’s saying with the work, it’s really powerful,” Ahlvers says. “Her use of material, I think, was one element that was really an attraction for us. I mean, being trained as a metalsmith, typically it’s in the jewelry arena and her work touches on that, but is certainly not jewelry.”

Crupi says she did start out in jewelry, and in some ways she considers her current art to be jewelry. Her decision to shift into more clinical and exploratory wearable art came after years of playing around with her interests.

“Blame it on grad school,” she says laughing and adding that as an undergraduate she created jewelry that could morph from one thing into another. “I began to think about how I could make work that had a greater connection to the body, and I had always been interested in psychology. And in my researching and reading, I thought about how I was fascinated with body and with movement. But what about body movement and pairing actual gestures and things that have meaning with these sorts of contraptions that I make?”

She says her “contraptions” started small and jewelry-like, and from there became more sculptural in nature. The life-size designs are now appropriate as wall art, which will be how they will be displayed at the Arts Center. With each piece, Crupi sends careful instructions for set up, and each piece goes from being a body piece to being a wall-mounted sculpture, each with a background or setting demonstrating how to use the piece in a clear, but artful, way.

Ahlvers notes that while the exploration of nonverbal communication and how we treat each other is a well-known theme among artists, Crupi’s vision and her pieces stand alone in their creativity.

“That’s the broad brush stroke with her work is that it’s about the human condition and how we interact or behave around each other. But there’s another layer to it that I think is uniquely hers,” he says. “She has a unique voice with that idea or that notion that so many artists have done before and everybody’s trying to carve out their voice within that idea. I think she’s done that.”