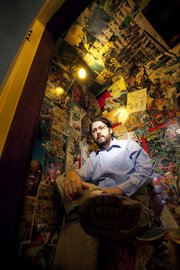 Jai Nitz’s desk contains objects sacred to comic book lovers: a statue of Jack Kirby, an Aztek action figure and a copy of Wally Wood’s 22 Panels — a strip that outlines the art of comics.

The last item is significant if only because writing comics is what Nitz does. A rare thing, to turn a childhood passion into a career, but Nitz has done it.

Nitz started reading comics at age 4. He would root the shelves of the Book Nook, a comic store in Atlanta. He read indiscriminately.

A precocious kid, Nitz would always race through school assignments, leaving his teachers befuddled. He remembers his first-grade teacher saying, “You’re not disruptive, but you’re finished, and you can’t just sit there. What do you want to do?”

“I want to create super heroes,” he said.

And with Captain Rat and Super Celery, Nitz took a step toward becoming a comic book creator.

When Nitz was in second grade, his family moved to Kansas City. Once there, he hunted for a comic store. He found Clints Comics.

Nitz read voraciously — “X-Men” and “Hellboy” were enduring favorites — throughout adolescence, then worked at two comic shops in high school. Afterward, he enrolled at Kansas University and majored in screen writing because the degree was closely aligned with comic book writing.

“Everybody was (skeptical) for a lot of reasons,” says Nitz. “If you talked to somebody about comic books, they would say, ‘Oh, they still make those?’”

Nitz made his first comic at 22, called “Con Sketch,” a comedy that snagged him a professional job. The pro gig was temporary and didn’t turn into more. So he self-published another and got hired based on that. It was a cycle he would repeat for years: self-publish, get hired, run out of work, repeat.

Then he had a breakthrough: He found a comic called “Mephisto and the Empty Box.” “Mephisto” was large with 10-point card stock and a matte laminate cover.

“A regular comic book is a … fragile object,” says Nitz. “(This) really took me. I thought, ‘God that’s a good looking comic book.’”

Using the Mephisto model, Nitz created “Paper Museum.” He took it to Comic-Con to show Axel Alonso, editor in chief of Marvel Comics.

“I watched him do this same speech to three or four different people in a row,” says Nitz. “When I handed him mine, he starts out (the same way), then he feels the comic. He says, ‘What .. is this? ...This is incredible.’ He’s the sharpest, most astute creative editor on the floor of Comic-Con, and it stopped him dead. And I’m like, now I know I’m doing something right.”

“Paper Museum” landed Nitz another paying job. Then his proposal for a second “Paper Museum,” won him an Xeric grant, the prestigious award sponsored by Peter Laird, creator of the Teenage Mutant Ninja Turtles.

Around the same time, Nitz won a Bram Stoker Award for horror writing; the prize placed him in a circle comprised of people like Stephen King, J.K. Rowling and Clive Barker. (Alan Moore and Neil Gaiman are the only comic writers to who have won the award other than Nitz.)

“He never phones anything in,” says Phil Hester, an artist for Dynamite who collaborated with Nitz on El Diablo. “Jai treats every gig like it’s opening night at Carnegie Hall.”

Nitz has written six issues for “Batman Strikes,” worked on “Tron Legacy” and wrote an Iron Man and Spiderman children’s book. Now he’s working on a comic called “Silver Star.” His future will be filled with days hunkered at his desk, his statue of Jack Kirby looming over him as he creates comics that will go on the shelves of stores like the Book Nook.

“That’s all I ever wanted to do was make comics,” he says.

Nitz, I think what you're doing is outstanding. There shouid be some major newspaper that has comics as a major section- comics like yours, plus others from around the world, every day. I would see no problem with getting advertisers for this section.

Third, people who play video games could receive a payment of so much off on new comics of their choice. Although most Americans don't know it, there is also a huge amount of people playing Board Games in Europe, especially (this is not Monopoly, but all kinds of games that aren't available much here), and there is a demand for people who can work with designers to create boards, figures and cards for these games.

I think you' re doing a great job. There is a real market with people throughout the world for comics of different kinds.

Are your comics available in other cities, such as San Francisco?

Major newspapers are interested in income generating ideas...not undergound/unknown comics. It all boils down to revenue, and like it or not, this is such a minimal and unimportant niche in society that it will never be mainstream or generate that much interest from society.

Secondly, I hope these people that are learning english would be schooled from a proper text and ciriculum and not these fantasy worlds that are portrayed in comics.

Thirdly, people who play video games need to get off of their mom's couch and get a real job and start contributing to society so I don't have to pay their unemployment! Any job, even a minimum wage job would help.

Congratulations, Jai, on following your dreams! I know you've faced strong criticism every step of the way, and I envy you for not backing down!

Sometimes when one follows their dreams, the things that are most important in life suffer along the way.

Oh does he have children?

I would like to know why my comment was removed. Can someone please explain? It was not profane, and I don't see how it violated the usage agreement.

Great question, my comment was removed as well. I said nothing that was a violation of the agreement.

Your comments were defamatory.

That's a pretty broad brush you have used here, Alex. I simply stated my opinion of him, which is very low. He is undeserving of the attention this article brought upon him, and he must be very thin-skinned.

But by all means, continue running your puppet show so only glowing comments appear, we most certainly don't want the truth about his character to come out.

If positive comments are all that are allowed, I suggest that you check out the lives of people that you do articles on. This guy certainly is not a positive figure in the Lawrence society, far from it.

Lawrence Kansas. This community has always been one of the leaders in promoting freedom of speech, personal rights, and generally a very liberal thinking population. It is somewhat ironic that you allow people to post their "opinions and views" but reserve the editorial power of "the man" to keep so-called free speech all granola and bland. Talk about keeping a brother down...

The Lawrence scene is full of dope smokers, geniuses, adulterers, philanthropists, morons, educators, dead-beat dads, Christians, athiests, agnostics, and many others. That is what makes the town so intersting. I'd just be careful what type of people you chose to promote through your site is all I'm saying.

A wise old man once told me "you can polish a turd, but it is still a turd." When I was little I thought it was just funny to say, but now you see that many times throughout your day.

Thanks for the soapbox... I'll step down and let someone else have a go.

It's funny how all of the comments and interest on this subject have just dried up and gone away... so it goes with people and their attention span. Always on to something that seems better than what is right in front of them. Sometimes I wish that some people would just dry up and go away.