Rex Hausmann working on his painting for the Dannin Project at the Lawrence Arts Center. 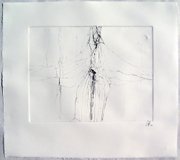 Consisting of 10 prints and about 20 sketches, Shattered finds Aspenberg exploring ideas on the loss of innocence. The simplicity and style of the sketches evoke thoughts of children’s drawings, which, when paired with dark, sometimes violent imagery, give the pieces a creeping, vaguely unsettling feel.

With the prints, Aspenberg took a more symbolic approach to addressing the exhibition’s overarching themes. She made several of the prints by putting broken glass plates directly through a press, exposing the details of a fragile object that’s been irreparably damaged. Other found objects used for the prints include string, wire and dried fish.

A printmaker and sculptor who works primarily in the New York City area, Aspenberg moved to Lawrence last year to participate in the Lawrence Arts Center’s artist residency program. As part of that program, Aspenberg will have a show at the LAC later this year, though she hopes this exhibition will be a suitable way to say hello to the city.

“I really wanted to show a body of work to introduce myself to the community,” Aspenberg says.

Songs Amidst Stillness – The Lawrence Percolator

The Lawrence Percolator will be abuzz with activity on Friday during Songs Amidst Stillness, featuring two art exhibitions and performances by several Lawrence bands and poets.

The Final Friday event pairs the Percolator’s current exhibition, Stillness and the Word, with a new collaborative project from some longtime Lawrence artists. Stillness and the Word paired visual artists with poets and musicians to celebrate the winter solstice create works based on the peace winter can bring.

The space’s new exhibition, simply entitled Collaborative Art Project, consists of four pieces created by close friends Regan Murray, Jack Ozegovic and David Van Hee. The three artists worked on the project individually and passed the pieces between each other to work on them. Though they didn’t have a given theme for the project, Ozegovic says he can see a common thread.

“There’s a loose connection between unconventional senses of humor, which all three of us possess,” Ozegovic says.

Friday’s event will feature performances by local bands Hello Biplane!, Heartscape Landbreak and The Sun My Friend, as well as poetry from Peter Wright and Josh Boyd.

The Lawrence Percolator is located in the alley behind the Lawrence Arts Center, next to the Social Service League. Performances begin at 7 pm.

San Antonio-based artist Rex Hausmann made a corner of the Lawrence Arts Center, 940 N.H., into his personal studio this past week, creating a painting in public view. And on Friday he’ll turn that space over to Lawrence-area artists to respond in their own way.

With the Dannin Art Project — named after the inspiration for the painting, Hausmann’s friends and local arts people Darin and Shannon White — Hausmann hopes to take all the elements that go into a gallery showing and put them right in the gallery for the public to see. Hausmann has made his creative process as open as possible. He’s clearly stated his inspiration, and has even taken the time to explain all of the symbolism in the painting on small posters throughout the makeshift gallery, which is located on the north end of the second floor at the LAC.

“I think there is a mystery about artists in the studio, so I think it’s exciting to be able to show the public what goes on behind the scenes,” Hausmann says.

During a reception Friday, the Lawrence Arts Center, 940 New Hampshire St., will celebrate the opening of the Dannin Art Project, as well as solo exhibitions from Hon Chung Zhang and Jennifer Crupi.