It took nearly three decades, but Bryan Thomas Schmidt took the seed of an idea and spun it into acclaim from a national book seller.

The Ottawa author’s science fiction debut, “The Worker Prince,” was honored as a notable release by Barnes & Noble reviewer Paul Goat Allen in his “Best Science Fiction Releases for 2011.” Schmidt will be signing copies of the Moses-tinged space opera Saturday at Hastings Books. Copies of the book will be available. The book can also be purchased at Cornerstone Bookstore at 217 S. Main St. in Ottawa, Amazon.com and Barnesandnoble.com.

We sat down with Schmidt to talk about “The Worker Prince,” his road to publication and that thrilling Barnes & Noble mention.

What: A book signing for “The Worker Prince,” named one of Paul Goat Allen’s “Best Science Fiction Releases for 2011” for Barnes & Noble. 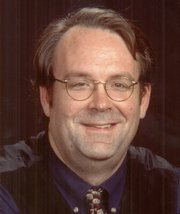 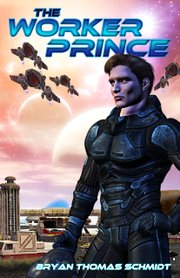 "The Worker Prince" was recognized as one of the best sci-fi books of 2011 by Barnes & Noble. Author Bryan Thomas Schmidt lives in Ottawa.

Sarah Henning: Can you tell us the background of the book — when you started writing it and how you got your inspiration?

Bryan Thomas Schmidt: In Salina, when I was a kid, I was going to Bible school and going to church. I liked all the Biblical stories, but I also liked “Star Wars” and (later) “Battlestar Galactica” and all the science fiction stuff. ... I thought that the Moses story would make a really good space opera if somebody would tell it like “Star Wars.” So that’s where the idea came from. Of course, it took me 27 years to actually sit down and write it.

I had that idea all that time. And some of the characters are still in it. And the same opening line that I always wanted to write was the opening line of the book.

SH: Since you came up with this idea so long ago, when you finally sat down to write it, how was that process? Obviously you’ve changed a lot as a person in 27 years, so do you think the characters would’ve been different if you’d written it when you first came up with the idea?

BTS: Oh sure. For one thing, the original idea was for a big TV mini-series, like “Centennial” (a late 1970s miniseries) or something. Eighteen-hour television program was what the idea was. Because, back then, I didn’t want to write novels, I wanted to write television and film. I did go to Hollywood and I did go to film school and I did work — had a couple of screenplays and things that I was working on out there. Worked for A&E and The History Channel and all these places for a number of years. I did all that, but then after I had a lot more life experience and my understanding of how people work. ...

SH: So how did you find your publisher and when did you finish the book?

BTS: It took me four months to write the first draft. Now, there’s been dozens of drafts since then. I started writing in about August of 2009 and finished in mid-November (2009). Then I put it away a little bit and did some rewriting. And then, over the course of the following year, 2010, I sent it out to agents and publishers and did some rewrites based on the notes that people gave me. It took me a long time and a lot of “Nos.” If you add them all up, I had 60 or 70 people who said no. And then I finally started sending it to some smaller presses and said, “Let me just try this, what the heck?” So I had three small presses that were interested in it and played them off for the best deal (laughs).

... With a small press, there’s no $10,000 or $15,000 promotion budget for my book. The marketing budget is whatever I can come up with. So I’ve been doing a lot of it on Twitter (@BryanThomasS) and email. ... So I have a podcast and I’ve done interviews and I’m doing a lot of book signings and trying to get the word out there. And, actually, as part of that, because I knew the guy, I sent it to the reviewer at Barnes & Noble. And he didn’t respond. I thought, “Oh, he probably hated it, he probably didn’t like it.” He’s reviewed for pretty big publications — Publisher’s Weekly and New York Times ...

BTS: I thought, “OK, that’s better than him slamming it.” I said I’d rather him say nothing. But then this list came out in December of the Best Science Fiction Releases for 2011 and the book was on there for an honorable mention, so that’s pretty cool. That’s pretty huge for a book by an unknown author, an unknown press, a debut novel — to be on that list was pretty amazing.

Inspiring! I shall read it. I wonder if it's hard, considering how he did this, to market to e-readers. Are there a lot of hoops to jump through before it's picked up for that?

Before I address rockchalker52's comments, let me clarify two things which are my fault, not the reporters. 1) The signing is from 1-4 p.m. Saturday, per the store, but given that I had it wrong when I talked with the paper, I will try and hang around until 5 in case anyone comes to have a book signed. 2) The book has real religion but is not Christian per se. It's not pushing an ideology. I just chose to use real religion and a real biblical story inspired the tale. It's written and intended for general audiences.

Now, rockchalker, thanks for your comment and interest. These days almost every publisher release ebooks and print books simultaneously. The marketing is not that different. My book can be found for many formats: $4.99 Kindle http://amzn.to/pnxaNm or Nook http://bit.ly/ni9OFh $14.99 trade paperback http://bit.ly/qIJCkS.

Marketing is pretty much the same, as I said. Lots of social media and reviews as well as word of mouth and just doing interviews, signings, appearances, Conventions, etc. I post schedules of all that and links on my website at http://www.bryanthomasschmidt.net.