Lawrence author Mary O’Connell is no stranger to acclaim.

She is the recipient of a James Michener Fellowship and a Chicago Tribune Nelson Algren Award. And The New York Times declared the author had a “gift for mordant wit” after her collection of short stories, "Living With Saints" (Grove, 2001) was published. 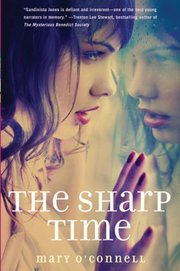 Publisher’s Weekly’s starred review said O’Connell shows “exceptional skill in building tension and creating atmosphere,” and Booklist wrote that readers will be “spellbound” by the “words and images that swirl through the pages.”

Despite all of the accolades for the KU alumna and graduate of the Iowa Writer’s Workshop, O’Connell admits to crying with relief when she read her first review. “(It) is sort of a dream come true,” she says. “Really, when you’re writing very late at night at the kitchen table, you never know what the response will be.”

And for O’Connell, sometimes the kitchen table late at night is the only opportunity she has to write. Her three children: Juliana, 13, Zachary, 10, and Veronica, 3, keep her busy throughout most days.

“I try to find time to work whenever I can--at the pick-up line or the doctor’s office, whenever there’s a quiet moment, but I prefer working late at night because there are no phone calls or kid appointments that interrupt me,” she says.

It was during those late nights of the past few years that O’Connell created the edgy and vulnerable Sandinista Jones, an 18-year-old high school student. Still grieving the death of her mother, Sandinista finds herself at a crossroads after an incident in her math class. She walks out of school and decides to take a job at a funky, second-hand clothing store.

“I wanted to write about a girl in late adolescence and how institutions in her life let her down,” says O’Connell.

“It is a very vulnerable time. The world is cracking open and often it’s not what you thought it was going to be. For Sandinista it was also a process of giving into empathy, coming of age and coming to terms with herself.”

Sandinista bonds with co-worker, Bradley, and she learns that she isn’t alone in her suffering. “Schools and churches are big institutions in kids’ lives and they can let young people down,” says O’Connell. “But within these systems there are individual kindnesses that can carry us through difficult times.”

During the icy January week during which the story takes place, Sandinista must decide how she is going to deal with the situation at her school, and the choices she makes are what drive the plot of the novel.

Although the book is categorized as young adult fiction, O’Connell admits that it isn’t for everyone. “There is some language and some fairly mature themes,” she says. But the author is pleased that students at Fordham University in New York will be studying the book’s themes for a class called “Catholicism and The American Self.”

The Catholic Church has been a reoccurring subject for O’Connell who sees the cornerstone of redemption particularly relevant for Sandinista. The contradictions within the Church are also “good for the gray area in art” according to O’Connell.

Fellow author Laura Moriarty will interview O’Connell about the themes of The Sharp Time, as well as her writing process, on Saturday, Feb. 4, at the Lawrence Public Library’s Questions and Authors series. The event takes place at the library, 707 Vt., at 2 p.m. and is free and open to the public.