Chocolate lovers can get their fill while helping out the arts 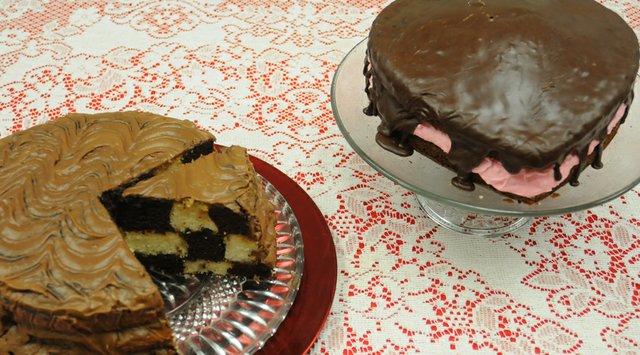 Twenty-four years ago, the Baldwin Community Arts Council hit on a successful fundraising recipe that started with art, mixed in Valentine’s Day and added a lot of chocolate.

Now a tradition, organizers are varying the annual Chocolate Auction’s successful recipe this year by stirring in the Lumberyard Arts Center, which has now merged with the BCAC. But those attending the Feb. 12 event shouldn’t expect much change since the renovated downtown lumberyard building has been its home the past two years, said Sandy Cardens, Lumberyard Arts Center board member.

The Chocolate Auction, like many favorite recipes, was borrowed.

Thanks to the generosity of talented cooks, bakers and artists, the auction was an instant success and continues to grow, said Lumberyard board member Sandy Cardens. Last year, it raised more than $7,000 for student art scholarships, art supplies for Baldwin school district classrooms, workshops, exhibits and other activities.

The community’s embrace of the Chocolate Auction is simple, said Lumberyard board member Sherry Bowden,

“Everybody loves chocolate,” she said. “There’s something about it. It’s just satisfying. It’s a daily requirement.”

Bowden said she mostly limits her daily intake to small treats but “ice cream and chocolate sauce are always a possibility.”

Chocolate baked goods are reserved for special occasions, Bowden said. The Chocolate Auction is one of those, and she often brings her heart-shaped chocolate peppermint cake.

“The red says Valentine’s Day,” she said, admitting she had toned down the recipe somewhat. “The center is supposed to be whipped cream. I didn’t go that decadent.”

The association with Valentine’s Day helps the auction’s attendance, too, because it gets forgetful husbands and boyfriends off the hook, Bowden said.

“They don’t have to think about it,” she said. “They just come down, get something and it’s done.”

Bidding for donated art can also get competitive with one of Russell’s paintings once fetching $2,000, Cardens said.

The auction also inspires bakers to donate creations beyond the ordinary. Cardens, a painter, has applied her artistic talents to create a chocolate house and a truffle tree for the auction but admits others have outdone her.

“Former arts council board member Christy Carlisle once donated a chocolate painting,” she said. “It was done in black and white chocolate. I can’t remember exactly what it was, but I think it was a Monet.”

“It’s just a lot of fun. We’ll have a silent auction for children so they can write down their bid on items displayed at a table especially for them.”

Refreshments, including hot chocolate from Ruth Ann Nutt’s and chocolate punch made from a recipe former arts council president Ruth Dickinson, will be available to all.

The doors will open at the Lumberyard Arts Center, 718 High St., at noon. The silent auction will start at 12:30 p.m. with the live auction beginning at 2 p.m.

Beat butter, sugar, eggs and vanilla at high speed with electric mixer until fluffy, about 5 minutes.

Spread 1 ¼ cups truffle filling between layers. Spoon about 1 cup satiny chocolate frosting into a decorating bag fitted with star tip. Spread remaining frosting on top and sides of cake, smoothing with a long metal spatula. Pat chocolate sprinkles on side of cake, pipe or dollop a ring of frosting around top edge of cake. Arrange truffles to frosting rings. Cover and chill at least eight hours.

Combine chocolate, half and half and butter into large saucepan; cook over medium heat; stirring constantly until chocolate melts and mixture is smooth. Remove from heat, stir in powdered sugar. Let stand 20 minutes. Place pan in a bowl of ice water and beat at medium speed with electric mixer until spreading consistency.

Break eggs into a small mixing bowl. Add the water and blend slightly with a whisk. Add the sugar and cocoa and heat until frothy with the whisk. Pour the mix into a heavily buttered medium hot griddle, tipping it back and forth until it is evenly spread. Use a square griddle to give the finished omelet nice even ends. Cook until the eggs are fairly dry, then sprinkle the chocolate chips evenly over the entire omelet. Carefully roll the omelet from one side of the griddle to the other and immediately slide onto a plate. Top with whipped cream and cherries.