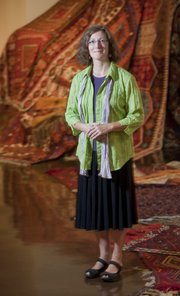 Susan Earle is curator of European and American art at Kansas University’s Spencer Museum of Art. Earle is pictured in front of a summer exhibit “Elegance Under Foot: Turkish Weavings” that featured a collection of Kilim rugs.

The project was a lofty one: find and collect art created by Harlem Renaissance painter Aaron Douglas for a touring exhibit.

The project was lofty partly because of the sort of work Douglas, a 1930s artist born in Topeka, created: book illustrations, book jackets, murals — things not easily preserved or portable.

Earle is curator of European and American art at Kansas University’s Spencer Museum of Art. The bold and vibrant Douglas exhibit, which traveled to Washington, Nashville and New York, was one of Earle’s most ambitious and enduring projects in her 16 years at Spencer.

“I found his work so fascinating and I still do,” she said. “He just was a really fascinating figure, aesthetically and in terms of where he was — from Kansas to the heart of the Harlem Renaissance.”

Having grown up in and around New York, Earle began an early trajectory into art.

At 4, she was creating abstract paintings in nursery school at the Museum of Modern Art in New York. She was told to forget smiling sunsets and dazzling daisies. Instead the preschoolers were told to experiment without form.

“It made a big impression,” she said. “I remember the look and feel of the space and making the paintings.”

Early exposure helped Earle develop an appreciation for art. But creating it was not something she pursued.

In her senior year, she helped compile a book on Helen Frankenthaler, a famous American abstract expressionist painter who died in December 2011.

After college, Earle worked in publishing, then at an art advisory firm where she curated for corporate clients. She would acquire art to put on display in offices and public spaces for businesses like American Express and companies in the World Trade Center.

Curating for the firm solidified Earle’s desire to study art history. So she toiled over applications and sent one to New York’s Institute of Fine Arts. She got in.

Earle started working for Spencer while finishing her dissertation in 1996. As campus curator, she works with donors, writes grant applications, finds art, organizes exhibitions and teaches.

For the past four years, she has taught an art-related course for KU’s mini-college, offered in June, a pursuit that has proved immensely fulfilling.

Because she is curator to a campus museum, Earle contemplates the learning needs of students when choosing art. But she zones in on underrepresented artists.

“I’ve been particularly interested in works by women and people of color, just to give balance to what we have and to give greater representation to under-represented groups,” she said.

Earle tries to satisfy learning needs by making thoughtful acquisitions. For instance, the Spencer needed a cubist painting for permanent display. No way could KU afford a Picasso.

Instead, Earle found a painting by Jeanne Rij-Rousseau, a French cubist painter of the early 20th century. Rij-Rousseau was a woman in the midst of the cubist movement whose name is often overshadowed by famous male painters.

“That was a great solution for us,” said Earle.

The painting was a way to give voice to Rij-Rousseau while still educating students. And it’s the students who inspire Earle every day.

“I love working with students: kids, adults, college-age students,” she said. “One of the exciting things about working in a university museum … is getting to work with students.

“Students are a part of everything we do here.”