A photo print is brought to life in the development tray during a darkroom photography class at the Lawrence Arts Center. 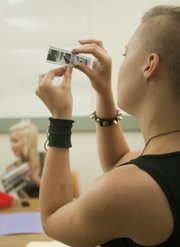 The timer on the enlarger clicks off, the light snaps out and Nina Friesen pulls a seemingly blank sheet of glossy white paper from beneath the easel. As the paper bobs in a tray of developer, there’s just enough glow from a red light on the ceiling to see the street number at Red Lyon Tavern creep over the surface.

Even as it introduces increasingly high-tech photo classes — iPhonography was offered for the first time this summer, and digital has been popular for years — the Lawrence Arts Center still has a tiny cadre of artists using its basement darkroom.

Surprisingly, most of them are young enough they may never have encountered a roll of film otherwise, at least beyond their baby pictures.

This summer’s adult darkroom class didn’t meet its minimum enrollment to proceed, and only a couple of experienced photographers regularly take advantage of open darkroom hours at the center.

Nina is one of those, but most of the other youths enroll in the week of darkroom photography the center offers to middle and high school students at its summer Arts Institute.

Instructor Ann Dean, who teaches both digital and darkroom photography, says the old-fashioned process is especially appealing for youths.

“Being in the darkroom is just much more hands-on, and I think they like that experience and going through every step,” she says. “They’re learning how to use equipment that they would never, probably, see otherwise.”

Nina shoots on an old Pentax her dad got when he was in college.

He showed her how to use it and eventually just gave it to her, she says. She’s taken multiple classes with Dean and some at LHS, and had her photos displayed in the halls of the arts center.

Nina says she likes the simplicity and contrast of black and white images, and the discipline that goes into developing film and prints.

For Mason Denneler, also 15 and heading into his sophomore year at LHS, the art institute course was his first time using a darkroom.

Only about 10 of the 40-some shots he took earlier in the week turned out. And rolling and developing film in complete darkness took several tries.

But as a nicely composed, crisp print of the grandfather clock at the Watkins Community Museum of History emerged from its water bath, Mason said he might even prefer darkroom to digital.

“This one definitely takes a lot more work and meticulous adjusting,” he says, adding, “You have to be pretty patient.”

Outside of her darkroom classes, Dean herself doesn’t shoot on film anymore.

“It’s very time consuming,” she says, and buying chemicals and film can get expensive.

As an art form and a teaching tool, it has merit, she says. And even Instagram, the smartphone app that makes new photos look old with one click, can’t quite capture the look of authentic black-and-white film photography.

“I just feel like it should never be a lost art,” Dean says. “It’s beautiful.”

Thanks for keeping this art form alive! It's the best way to learn photography in my opinion. There is nothing like seeing an image develop right before your eyes.

It's like learning publication design. You'll never be any good at it until you know how to do it manually. The process requires you to think and plan in advance.

I feel lucky to have had an excellent photography program both at my high school and in college. We even had to process and roll are own negative film. No store-bought film in our school.