The Poehler loft apartment project in east Lawrence boasts a putting green for its tenants. The building, which will have an open house Friday, is fully leased already and has a waiting list that’s about 70 people long. 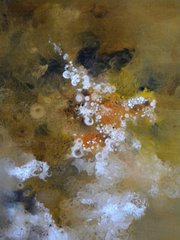 One of Molly Murphy's works that will be displayed at the New Invisible Hand Gallery, 846 Pa., during July's Final Fridays. 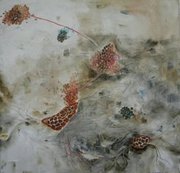 If you appreciate the transformative power, or the way that artistic individuals can turn objects into art, then you won’t want to miss this month’s Final Fridays. The most impressive transformation would have to be the opening of the new Warehouse Arts District on Pennsylvania and Delaware streets. In addition to a ribbon cutting ceremony on the Poehler Lofts (619 E. 8th St.) between 5 p.m. and 6 p.m., five galleries in the area will exhibit works from artists from the region and the country.

“This whole area has been awakened from the dead,” says artist Clare Doveton, whose collaborative show with Molly Murphy will be at the Invisible Hand Gallery (at its new location, 846 Pa.).

“The space is beautiful!” she says. “I can’t believe how they have transformed that building. It is just incredible.”

“The opening of the Warehouse Arts District is one of the most exciting things that I have ever been involved with,” says Adam Smith, owner of The New Invisible Hand Gallery. “Molly Murphy and Clare Doveton are two of my favorite artists and I can’t think of anyone I would rather have welcome everyone to the New Invisible Hand.”

Murphy and Doveton’s show, “Intuitive Nature” will feature 15 works done mostly in acrylics. The two artists, who have been friends for years, have a similar outlook on life and work in similar palettes. “Home has always influenced my work more than anything else,” says Doveton.

“Living out in the country now, the work is inspired by the wide open fields and skies; the blur where earth meets sky,” she says. “For me, painting is a process of translating the memory of place (influenced by emotion, season, everything else, etc) onto the canvas.”

Murphy is also intrigued by memory. “All the works in this show deal with the science of memory and various theories in neuroscience.”

As for the new arts district, Murphy is also enthused about the neighborhood, which she says has received “a sudden jolt of energy.”

“I am excited to see how this area develops and what it does for the artists who are in this area now,” she says.

In addition to the Invisible Hand, four other venues will host shows Friday night in the Arts District including The Blue Room Gallery (720 Del.). The one night show, “Dataclysm” is the work of four artists who have created works from electronics. Curator Yuri Zupancic says that the show will consist of art created from repurposed electronic salvage, computer parts, and cords. “The artists have used things that hold and transmit data and information.”

This transformative theme extends beyond the warehouse district, however, and galleries that have been involved in Final Fridays since its inception, continue to be exciting places to see art. This month the Lawrence Arts Center is displaying work from Monica Vidal, Amy Kligman, Mike Hoffman, Willy Chyr, and Ann Dean. And the Lawrence Art Party at Hobbs Taylor Lofts will have artwork from over two dozen artists.

Artists paid $10 to the League and filled a bag with whatever they could find in the local thrift store,” says show curator, Rachael Perry. “The resulting masterpieces are displayed in an explosion of color and unusual materials”

“It’s called Found Object or Assemblage Artwork,” says Gary Hinman, whose piece “Digging Deep for Art” will be on display. “I came out of the Thrift Store with some tools and twisted sticks and came up with a shovel,” he says.

Hinman, who recently retired after teaching art for 33 years in the Eudora School District has participated in the benefit every year. “It’s a great fundraiser for both The Percolator and the Social Service League,” he says.

They need a better name. Warehouse just doesn't do it. Maybe something to do with railroads as it is near the Santa Fe yard. Actually, it is near La Yarda which had Mexican shanties for railroad workers.