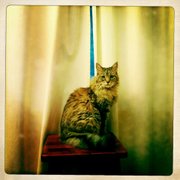 The introduction of photography applications for smartphones got me experimenting with the Hipstamatic app on my iPhone. The unique filters, square format and the fact that the phone is always with me leads me to take photographs I might usually pass by. While there may be debate about the validity of these in-camera processing apps for journalistic work, I enjoy that these tools encourage me to photograph ordinary subjects and delight in the unexpected results.

For anyone who thought the whole funky, camera app craze was just a fad, the April sale of Instagram to Facebook for about a billion smackaroos may suggest otherwise.

Plenty have scoffed at the validity of images produced from apps like Instagram or Hipstamatic both as art but also as ethical representations of news situations when used by journalists.

Despite all the concern, presidential elections, political uprisings and even wars are now covered with the iPhone and its apps by professionals with quite a bit of success.

At the heart of the debate is not the camera — in this case the iPhone or an Android smartphone — but rather the in-camera processing applied to the images once they are shot. The end result is often a surrealistic look similar to that of toy cameras like the Holga, Diana or Lomo.

This “look,” which is now so easy to come by and does not require a photo lab, is what purists believe is taking center stage over the image itself.

My take on it is this: Sure, the apps are gimmicky, the “effect” is easy to come by, and the images don’t exactly produce 100 percent accurate representations of what can be perceived by the human eye. But I would also argue that polarizing filters, black and white film, fish-eye lenses and a slew of other widely accepted practices aren’t much different.

For journalists, as long as the use of the app doesn’t diminish what is being communicated by the image’s intent, I don’t see anything wrong with it. I think the best things camera apps have done are challenge us with this debate about what we are willing to accept as real and also provide people with more tools for exploring creativity.

The worst thing might be the multitude of Facebook photos featuring sunsets, wine glasses and cats. (For the record, I think Mike Yoder has the coolest cat photo I’ve seen to date by use of the Hipstamatic app.)

Is that your cat, Nick? Beautiful little guy (or girl). I'd macro it, "I'm ready for my closeup, Mr. DeMille."

That is Mike Yoder's cat. I think her name is "Ezzy."