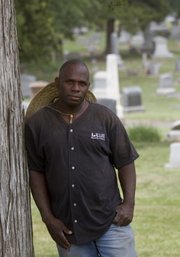 Frank Demby has been a cemetery caretaker at Oak Hill, Memorial Park and Maple Grove cemeteries for 29 years.

A judge ordered the change when relatives lambasted the former owner for failing to keep the cemetery in decent shape: They complained that Memorial Park was seldom mowed, the roads were shoddy, the trees were overgrown and some graves were even left unmarked, the company having neglected to place tombstones in a timely manner.

The cemetery has come a long way since, says Frank Demby, city Parks and Recreation employee and cemetery caretaker.

“It was a war story,” Demby says. “It was so close to Memorial Day, and it had tall grass, trees and the roads were all jacked. That weekend the city took (Memorial Park) over, it was great.

“There was not one department that didn’t have a hand in transforming the cemetery. We had street department out here, we had forestry, we had water boys, we had everybody out here. It was like you couldn’t hardly move, there were so many people. … For three days, there was dust in the air, but when that dust settled it was like boom, like somebody had just said ‘abracadabra’ and changed the cemetery. I was so happy about that.”

Demby is a caretaker for Oak Hill, Memorial Park and Maple Grove cemeteries. He has worked for the city for nearly 30 years: mowing, extracting tree stumps, digging graves.

Demby started as a seasonal employee in 1983, having taken the job for the summer when he was laid off. He assumed the work would be temporary, that his old employer would ask him back. Instead, the city decided to hold onto him. It was a decision Demby appreciated — he loves his job.

But the love for the job came reluctantly.

“When I first started working here, I was scared to death of death,” Demby said. “I had to deal with that. The hardest part was not what was going on in the cemetery but what was going on in my mind. Life, everything, is all mental. … You can psych yourself out real easily out here, if you allow yourself to. But in time you find out that this is one of the safest places to be, the cemetery.

“Death has never harmed any living thing. It’s always living and living that’s harming each other.”

In some ways, the death-centric job has benefited Demby: Years of working around death have sloughed away Demby’s fear of dying. But time has not improved everything.

“The hardest part of the job for me is baby funerals,” said Demby. “No matter who — the funeral directors, the vault people, everybody — you can always tell a baby service. There’s a totally different air. That’s probably the hardest part on everybody.”

And working with grieving families is always hard. When Demby talks about relatives of the dead, his voice exudes empathy, compassion and an honest concern for the bereaved.

On a warm day in May, Demby cruised through Oak Hill Cemetery in a work truck. Wearing a floppy straw hat, he pointed to notable landmarks. At one point, he pointed to an old holding vault: a place where cemetery workers would hold bodies when severe weather prevented burial. The bodies would remain in the vault until the storms subsided: hours, days, even weeks.

Demby gestured to an empty field tucked in the east side of Oak Hill — a potter’s field.

“That field is actually full of people,” he said. “You (only) see a few stones, but that’s filled. Nobody had any money, so they just buried them.”

Next to the potter’s, or pauper’s, field, is the Demby family plot. Demby’s brother was buried in Oak Hill in 2005. And someday, Demby will be buried there as well.

“I love all this cemetery,” he said. “It’s peaceful. This is my favorite spot. This is where our family is. … I just like it so much.”

That was lovely. Thanks to Mr. Demby and the city for taking such good care of the cemeteries and the families.

Thank you Frank, you have been more then just a caretaker for the cemetery,you care for the families too. We all love and think of you often. Good job my friend.

Thank you Frank, you have been more then just a caretaker for the cemetery,you care for the families too. We all love and think of you often. Good job my friend.

Thank you Frank. You are a true asset to the City of Lawrence!

Thank you LJW for the nice story. Thank you Mr. Demby. Your dedication is appreciated.

Wow...has it really been 29 years!!! Great story Frank and thanks for taking the time to give my sisters a little extra tlc out there. I hope your doing well and email me sometime!!!

Wow...has it really been 29 years!!! Great story Frank and thanks for taking the time to give my sisters a little extra tlc out there. I hope your doing well and email me sometime!!!

Frank you are a greater thinker, your gentle wisdom could not be more profound!

This is a lovely article, thank you for your caring and compassion.

Thank you Mr. Demby for your dedication and caring and hard work. Thanks LJW for a great story.

Love, love, love this story! Blessings to you, Mr. Demby! You will be rewarded some day!

Frank is a great guy, i'm glad he is my friend

Having known Frank since high school, he is and has always been a great guy. It is great to see folks who serve the community get recognized.

Great article, and from what it sounds, great person, as well.