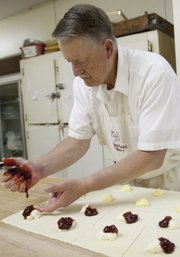 It’s the drunks who come at night. They stagger in bleary-eyed, fix their gaze on the wood display case and cast a slurred order at the person behind the counter.

The person behind the counter is often Mike Tennyson, owner of Munchers Bakery, 925 Iowa.

Decked in white — white shirt, white pants, white shoes, white apron — Tennyson slides from his usual position standing over a 16-foot long table making doughnuts, and strolls to the front whenever the bell on the front door jingles.

“We own the night,” said Tennyson. “Word gets around pretty fast about the places that are open all night. We have people coming in here all night long, and a lot of them are drunk.”

The drunks eat, maybe linger. Perhaps fall asleep on one of the benches clustered around the store.

It’s the drunks who come at night. But they aren’t the only ones with a sweet tooth: athletes, coaches, lawyers, teachers, truck drivers, cashiers, clerks, students, reporters. Everyone loves a doughnut every now and then. And Tennyson is the man to make them.

He bought the bakery back in 1989. Originally a bread-focused bakery, Munchers has transformed into a doughnut haven.

“It evolved (because) everybody likes our doughnuts,” said Tennyson, who has only ever wanted to be a baker and business owner. “It’s definitely best working for yourself than for somebody else; you don’t count the minutes.”

Which is good, because there are a lot of them. Tennyson works 10 and 12-hour days 5 days a week. On weekends he works alongside his son, Michael Tennyson Jr.

On Saturdays, Tennyson shuffles in a little after 11 p.m., changes his shoes and dons an apron. A rock and roll station streams from an old radio lodged in back. There is an ongoing, incidental conversation between Tennyson and his son, Michael Jr. But mainly, the two are silent and focused; the only other sound is the click of the knife touching the table as it cuts through a 16-foot tube of dough. The knife kisses the table thousands of times and Tennyson slices swiftly.

The litany is exhausting. And so is the job. The hardest part? “Getting up every day,” said Tennyson.

Tennyson sleeps a split shift: from noon to 4 p.m., then again from 8 to 11 p.m. But sleep doesn’t keep him from getting exhausted at the end of every day.

But the doughnut lovers pour through the door every morning. And the trickle begins early. On a recent Saturday in May, the first batch of doughnuts was removed from the fryer about 2:30 a.m. Within minutes, a bevy of 20-something men stumbled in, and swayed to the counter. One of them ordered a glazed.

Tennyson picked up a warm doughnut with tissue paper, placed it into a crisp white paper bag and handed it to the man, who was ostensibly drunk. It was night, after all.

I don't even really like doughnuts, but man, their cream cheese doughnuts are really amazing. Totally worth stopping by for.

"It’s the drunks who come at night."

Hope they walk to the bakery

Used to line up for Swan's located in a back alley in Manhattan for late night donuts.

Ick, ick, ick. Tried one once in 1982 and that was the last one I ever had. Just touching one was like sticking your hand into a can of warm Crisco. Unfortunately I eventually lived downwind from that greasy gut-bomb place for almost eight years and the smell was something I'll never forget.