Simple summertime sippers are easy to make, easy to drink

Bartender Lindsay White pours a glass of Spiked Lemonade Shandy at Esquina, 801 Mass. This version of the drink, in a glass rimmed with Tajin chili-lime seasoning, features vodka, lemonade and light beer with orange and cilantro for garnish.

This week, we asked a handful of Lawrence bartenders to concoct a few cold libations perfect for outdoor summer sipping.

Of course, fresh fruit was the key ingredient of choice.

Bartender Paige Ensminger said she was looking for something simple, without too many ingredients. The Blueberry Gin Rickey, she said, is a “classic cocktail with a little twist.”

Spiked Lemonade came from bartender Lindsay White at Esquina, 801 Mass. The drink not only tastes good, it looks especially pretty in a clear glass or a pitcher, thanks to the addition of fresh fruit and herbs.

Any fruit you have on hand would work, White said. You could even switch it up by adding a splash of fruit juice or flavored vodka.

“It could change every time,” she said. “It turns a regular lemonade into a patio drink.”

Restaurant owner Angel Alvarez lived in Jalisco, Mexico, until he was 17. There, he said, he remembers picking and eating guavas straight from the trees.

He said the juicy, pink-fleshed fruit is the perfect addition to make a traditional margarita into something new, and perfect for the patio.

“Guava is one of our favorite fruits,” Alvarez said.

Bar manager Lisa Wall described the drink, in which cream is optional, as a fresh, lighter take on a summertime favorite. Plus, she said, you don’t even need a blender.

Cheers to summertime, and the drinks that come with it. 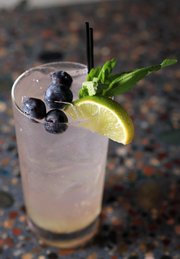 A Blueberry Gin Rickey is a cool summertime patio sipper.

Juice of half a lime

Muddle blueberries in a glass with simple syrup. Add lime juice and gin. Shake with ice. Strain into an ice-filled Collins glass, and top with club soda. Garnish with lime wedge, basil and blueberries. 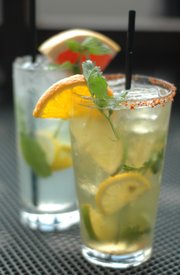 Make this drink by the glass, or multiply the recipe to make a full pitcher for a group. For a Latin-inspired version, add cilantro and coat the rim of the glass with chipotle-lime Tajin seasoning instead of sugar. For an alcohol-free version, just leave out the vodka.

Your choice of sliced fresh fruit, such as watermelon, strawberries, blueberries, oranges or grapefruit

Your choice of fresh herbs, such as mint or basil

Sugar for rim of glass (optional)

Make drink as above, using a pint glass instead of a Collins glass. Add light beer, such as Dos Equis Lager, to fill glass. 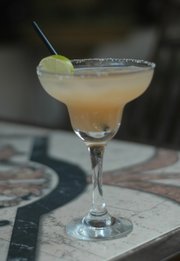 Salt and lime wedge for garnish

Salt the rim of a margarita glass; fill glass with ice. Pour in tequila, simple syrup, lime juice and guava juice, and stir. Garnish with lime.

Note: To make guava juice, place a can of guavas in a blender with just enough water to puree. Strain through fine sieve. 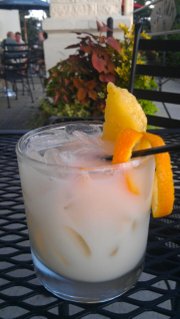 A Colada Lite can bring you the joys of a pina colada without the calories.

Serve over ice in any glass you like. Garnish with orange twist and pineapple.