Photo courtesy of One Tree Photo+Cinema.Kaw Valley Kickball League players Mick and Robyn Cottin, Lawrence, got engaged on the kickball field at Hobbs Park and, in June, got married in the same place. They play for the Liberty Hall Late Fees.

The kingdom is full of short-shorts, stat dorks, bona fide athletes, questionable calls, occasional streakers, impromptu fireworks displays, yard beer galore and at least one appearance by a live goat (a team called the Goats brought it to one of their games, of course). 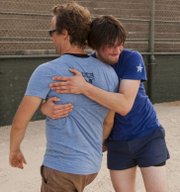 Hey, wouldn’t it be cool if someone made a documentary about all these shenanigans?

That wish is being granted, and the effort is officially under way this season.

For a few years now, people have talked about the idea of a documentary about the league, which started with a handful of downtown restaurant workers boozing in the park and allowing “do-overs.” In about a decade it’s grown to a four-division, 32-team phenomenon with official rules and, typically, a waiting list to get in. The league, which is one of two in Lawrence, even helps charities.

“It’s so special, we’ve gotta capture it,” says Nick Lerner, Red Lyon player and league board of directors member, “We’ve really developed this community. We’re so passionate about kickball, of all things, but it creates friendships ... we’re family.”

“I don’t know what it is about this town and why our league draws so many people to it,” Costello says. “It’s pretty awesome.”

In addition to rolling his own camera, Costello has recruited other players — with varying degrees of experience and types of equipment — to contribute footage.

And in the Kaw Valley Kickball League, there’s no shortage of fodder.

Phil Chiles lurches through a darkened park, heaving a circa-1970 Coleman cooler — forest green, metal and more vintage cool than ergonomically friendly — with both arms and a hip.

Like dozens headed in the same direction, he soon emerges into the light streaming from Hobbs Park field, where the Kaw Valley Kickball League game of the week has just started. Up a few flights of stairs and past a couple hundred other spectators, Chiles (who owns Wild Man Vintage, 939 Mass.) spots a few Wildman Attack Force teammates, takes a seat, opens his cooler and cracks a PBR.

The loss was ugly (28-3), but Wildman’s pre-game olive branch — a suggestion to split a pony keg of Leinenkugel’s Summer Shandy — made the victors hard to hate.

Beer is part of what makes the kickball world go round.

Curtis McCoy, a player for the Mario Chalmersiz and one of the league’s resident fashionistas, takes credit for pioneering that last look.

A recent Sunday found him in turquoise cheerleader shorts with a Mexican poncho to watch the game of the week at Hobbs Park. The following week, he’d be pitching for the Chalmersiz in red mini-shorts, a retro, midriff-baring Puma T-shirt and suspenders. McCoy also has been known to referee games in a Winnie the Pooh suit.

“It’s all about making people laugh,” he says.

For the past six years, summertime Sunday nights have found Mick and Robyn Cottin at Hobbs Park.

On one of those Sundays last summer, their team was seven innings into the game of the week when Mick, the Liberty Hall Late Fees team manager, ordered Robyn — who normally plays shortstop — to the catcher’s position instead.

There was questioning and cursing, he recalls. “She was really pissed.”

But Mick, his parents, Robyn’s parents and the catcher she replaced knew something Robyn didn’t: Mick was about to call a time out, jog to home plate, get down on one knee and propose to her.

She said yes. They kissed, hugged and ran the bases hand in hand. The crowd went wild.

Two innings later, in the bottom of the ninth, the game was tied. Mick was up to bat, Robyn was on third, and he kicked her in for the winning run — no joke.

In June, the couple tied the knot on the same spot they got engaged, with their wedding party — half of whom they met through kickball — fanned out along the baselines.

For Robert and Corinna Wood, Sunday is date night — at least in the summertime.

With baby sitter secured, the Lawrence couple head for the kickball fields to represent the Free State Growlers. As he stretched to prepare for a recent game, Robert pulled on a cigarette and sipped Coors from a can in a green Kaw Valley Kickball League koozie.

He’s been playing since the league got under way, back when it was “a bunch of out-of-shape alcoholics” looking for something to do on Sundays.

About seven years ago, Corinna agreed to sub for her husband when he had to work. She’s been playing since.

“I got married into this league,” she says.

Robert says he’s seen the league burgeon in size, expand beyond just bars and restaurants and get more competitive.

“We’re just here to have fun,” Robert says, then pauses. “But we don’t come out here to lose.”

When asked to recall his favorite kickball moment, former league commissioner Kelly Corcoran doesn’t have to think about it long.

“The ’04 championship game was pretty remarkable,” he says.

The South Park match-up between Corcoran’s Love Garden Squids and Papa Keno’s was probably the first Kaw Valley Kickball League case with a “decided villain and hero,” says Corcoran, who owns Love Garden, 822 Mass. He no longer plays but still runs the team.

Papa Keno’s was the “bad guys,” he says, and the crowd derided them throughout the game. Love Garden was the fan favorite — but the decided underdogs.

“For Love Garden to win was kind of a good thing,” Corcoran says.

In the present era of Kaw Valley Kickball, Pita Pit has joined the league’s most dominant teams.

They don’t really wear weird outfits or carry zany signs. Pita Pit has a strategy, applies athletic prowess and — so far this season — wins every time.

Player Jon Peach, who owns the Pita Pit restaurant at 1011 Mass., played baseball and football for William Jewell College. He’s not the team’s only collegiate or high school athlete.

“It’s really a mental game,” Peach says, likening their strategies to those applied in baseball. “Our philosophy is ‘play smart.’”

Peach says he’s aware other teams look at Pita Pit as “the jock team.” But kickball is social for them, too.

Pita Pit player Andy Dalton, of Leawood, says most team members are friends from college and drive from homes in the Kansas City area to meet in Lawrence each Sunday.

“It’s a reason to hang out,” Dalton says.

On the kickball field, self-proclaimed “sports dork” Jason Hwang is known as Cougar.

He’s also known for base-coaching, reffing and leading the crowd in “Take Me Out to the Ball Game” during the game of the week’s seventh-inning stretch.

Hwang, of Overland Park, is in his second season with the Channel 6 Toe Pokes; in nine seasons, he’s played for seven teams, none of them dominant. He hasn’t exactly been traded, Hwang says. He’s “more like a lost puppy looking for a home.”

On Tuesday nights, you’ll find him participating in the Kaw Valley Kickball League podcast at Harbour Lights, 1031 Mass., where talk involves reviewing the weekend’s games and scores, discussing discrepancies in rulings and previewing next week’s games.

A couple of times per season, he goes full-on stat geek, compiling team RPI (that would be Ratings Percentage Index, which is used in NCAA basketball) standings for the league’s website.

Costello, who produces “The Turnpike” show for Channel 6 and also answers to “Styles,” expects to be going through a lot of kickball footage at the end of this season.

In the meantime, he says, he’ll continue trying to settle on a storyline, one that will probably highlight a few teams and people that represent different archetypes of “hard-core” kickballers.

There’s no set release date for the project, and if it doesn’t crystallize this year, Costello says, they can always shoot more next year.

“What is it that draws people to play this kids game as an adult and take it so seriously week in and week out?” Costello says. “What would really make this documentary a success is that it needs to be about people.”