Allen Chen separates a mold for an installation Monday at the Lawrence Arts Center. Chen is a ceramics artist and a Lawrence Arts Center artist in residence. The year-long residency program chooses artists who can create a new body of work as well as contribute to the community during their time in Lawrence. 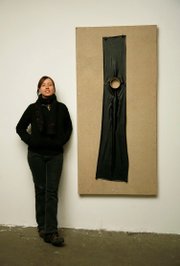 Artist in residence Carla Aspenberg is pictured next to one of her pieces. Aspenberg, a printmaker and sculptor, made it through more than 100 applications for the residency program. 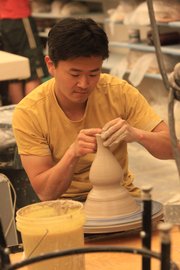 Allen Chen forms a new piece on a wheel Monday at the Lawrence Arts Center. Chen is one two current artists in residence at the arts center.

Allen Chen throws for a living.

Well, that’s a bit of a misnomer. It’s called “turning” in Europe, he says, and that’s a little more accurate. As a ceramics artist, he “throws” clay on a wheel, creating series of large, functional pots and jugs as well as a portfolio of installation work — perfect spheres that will hang in galleries. Ceramics is his passion — it has been since age 12, when his family moved from Taiwan to California, where he grew up — but it’s not the easiest way to earn a living.

But for artists like Chen, there are residency programs at universities and arts centers across the country. Currently, he’s one of two residents at the Lawrence Arts Center. It’s a year-long gig, but he wouldn’t have it any other way.

Susan Tate, director of the arts center, says that Chen and Carla Aspenberg, a printmaker and sculptor, made it through more than 100 applications for the residency program, which began in August. Tate was looking for “innovative and high-quality” artists who could create a new body of work during their year-long appointment as well as contribute to the community.

Chen and Aspenberg both teach several classes at the center while working on their own portfolios, which will be shown in an exhibit on May 25. They’ve both had residencies elsewhere — Chen in Red Lodge, Mont., and Aspenberg at Pilchuck Glass in Seattle and several small galleries on the east coast — but both praise the Lawrence residency program as one of the best going.

“A lot of towns claim to have a vibrant arts scene,” Chen says, “but I was pleasantly surprised when I got here and saw that, yes, this is great, this is by far better than advertised.”

But the scene of always something going on is just an added bonus for the up-and-coming artists, Chen says.

Lawrence is one of the easiest places to live because “people are incredibly friendly,” Aspenberg says.

As young artists, they move around a lot, and both are hoping to find yet another residency after this one finishes. That can be tough, Chen says, but that’s just the downside of the opportunity to be a resident.

“The networking of it is great,” he says. “People engage like they’re going to be friends forever.”

While Chen works in the ceramics studio, Aspenberg is a printmaker, teaching classes in intaglio and woodcut relief. Her passion is printing on shattered glass, “exploring different materials to make them look like something they’re not,” she says.

It’s that kind of innovation, Tate says, that makes her a good artist and her and Chen assets as residents. Overall, the residency program gives a leg up to artists and a resource for would-be artists in the community, Tate says. The curatorial support of the center boosts the residents’ careers while the time devoted to teaching spreads their knowledge.

@ Christine: that sounds like a great resource; I know the Lawrence Arts Center has had some "fashion" classes recently....maybe you could call or e-mail them?

Allen Chen is a superb teacher. He has a profound knowledge of clay, a willingness to experiment, and a lively teaching style. I've learned so much this past year. Keep up the great work, Allen!