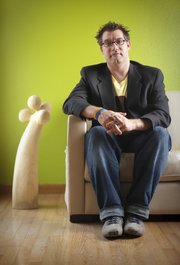 Lawrence artist Darin M. White is pictured on Thursday, April 3, 2012 in his home. White recently returned from Brooklyn, New York, where he showed a series of his work.

Organic corn seed and seed packets that were given to viewers of "Overflow." 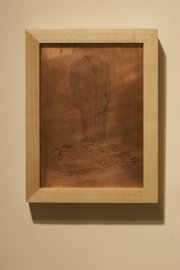 Pictured at left is “Bear Heart,” a reclaimed taxidermy black bear, and, at right, "Overflow," a site specific sculpture installation, by Darin White.

Lawrence artist Darin White is always thinking about the opportunities of life. His latest exhibition, “Overflow,” which he displayed last month at the Soapbox Gallery in Brooklyn, N.Y., focused on life cycles.

It’s not an abstract concept for White, 39, who created the show as part of what he calls a healing series after his 5-year-old son Caden died of neuroblastoma three years ago.

“I think that it’s part of the healing process, and as an artist it’s important to explore and share and ask questions about things you see in life that are important,” White says. “Those are treasures, pearls, even through this tragedy of losing a son.”

One piece is a sculpture of a barn overflowing with corn kernels.

“The piece is about cycles of life, and seeds are really important because I think seeds demonstrate the cycle of life — (they get) planted in the ground, die, grow and produce more seeds,” he says.

For White the art’s concept is the key.

“To me, it starts with both the visual and the concept, and really telling the story of the concept in the visual,” White says.

His strong sense of what is important in his art makes White a standout to his former teacher, John Hachmeister.

“His art is about what’s really important to him. He’s not nearly as interested in what’s trendy in art. He’s developed his own style and trajectory in the art world, and he sticks to it,” says Hachmeister, an associate professor of art at Kansas University.

White and his wife, Shannon, both artists, grew up in Lawrence together and have two other children, Noel, 10, and Claire, 2. They run a local arts organization called b.a.l.m., the beauty, art and life movement, which they use to engage and encourage artists worldwide.

“We really want to be more involved in the art community and producing art, using our talent and gifts to the fullest ... we provide opportunities for artists to display their work an environment to talk about their work, to bounce ideas off each other,” White says.

The Whites also run their own company, Display Direct, which makes interior structures for commercial spaces.

Although Darin White’s primary medium tends to be sculpture, he also works with others, such as drawing, print-making and painting.

Growing up, he always loved art but didn’t realize it was a career option until much later.

“I was always doodling on the side of my page in school,” he says. “It’s a labor of love to be an artist. It’s usually not very lucrative ... if I had to make a choice of not producing art, it would be denying part of myself.”

Lately, White, a member of the Lawrence Cultural Arts Commission, has focused more on the curating side of art but says he’d like to exhibit his own work more.

His decision to stay in Lawrence makes White different from many of his peers.

“This is not the easiest place to succeed, and he is. He’s tenacious and he’s made wise decisions in his art career,” Hachmeister says.