Richard Bean, who lives near Baldwin City and owns Blossom Trail Bee Ranch, gets ready to check his hives on Thursday Sept 27, 2012. Bean's farm is one of approximately 30 included in this weekend's Kaw Valley Farm Tour. 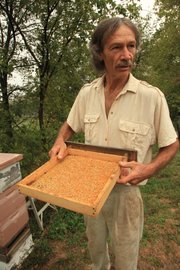 Richard Bean’s Blossom Trail Bee Ranch, 669 E. 2100 Road in Baldwin City, will be one of 22 farms open to the public this weekend during the annual Kaw Valley Farm Tour.

Honeycomb can be chewed and swallowed, waxy comb and all, which Richard Bean of Blossom Trail Bee Ranch said is especially soothing for a sore throat. Other suggestions include mashing a piece of comb atop buttered toast, or putting it on apple slices or cheese and crackers.

Eating bee pollen from local flowers is thought to have nutritional and anti-allergenic properties, although some sources recommend consulting a doctor first to avoid an unwanted allergic reaction.

Bean says he eats teaspoons of bee pollen straight from his hives. But he said not everyone likes the grainy texture, preferring to sprinkle it in smoothies or on cereal.

The annual event celebrates the diversity and availability of locally grown food in northeast Kansas. The 22 farms on this year’s tour produce a variety of products, including fruits, vegetables, beef, pork, cheese, wine, sod, flour and milk.

Tickets are $10 per vehicle for the weekend. For more information, a complete list of participating farms or to buy tickets online, visit KawValleyFarmTour.org.

Buzzing bees blanket the tray of honeycomb in Richard Bean’s bare hands. At close range, their striped abdomens and delicate wings are visible in detail.

After 40 years of keeping bees, Bean still marvels at them.

Spotting the queen, Bean pokes his finger into the mass of insects, gently nudging away some of the worker bees to show her off.

“How does she create 2,000 eggs a day?” he muses. “Machinery that we cannot really, in any way, manufacture — natural machinery.”

Bean’s Blossom Trail Bee Ranch, 669 E. 2100 Road in Baldwin City, will be one of 22 farms open to the public this weekend during the annual Kaw Valley Farm Tour.

Bean sells the honey, bee pollen and honeycomb he raises at the Saturday Lawrence Farmers Market and both Lawrence Hy-Vees, 3504 Clinton Parkway and 4000 W. Sixth St. He harvests his products from about 20 hives he keeps at his home and another 10 or so he has off site.

Perhaps that’s why he gets along with them.

Bean is not a man who is easily agitated. He’s tall and thin, and moves quietly and deliberately. His voice is soft. He speaks slowly.

He’s calm, even while prying off the lid of a hive of bees whose instincts tell them to sting predators threatening their colony — best in the eye or mouth, the only place they could injure woolly bear, for example. That’s why Bean wears a hat with face netting, just in case.

“Hi girls,” he says, as the bees swirl around him.

The beekeeper in his hometown of Beloit taught Bean the trade. His first project was removing a colony of unwanted bees from a resident’s shed and moving them into the right equipment so he could keep them for himself.

“Just had a notion I wanted to do it,” Bean said of beekeeping. “I think after a while, you sort of realize it sort of fits your personality.”

In addition to raising his own bees, Bean teaches beekeeping for beginners and gets called a couple times a month to remove bee colonies from homes and trees. If he can keep them alive, which he tries to do, he can relocate the bees to his own hives and harvest their honey.

From time to time, Bean does get stung. He’s learned a little onion juice is the best thing to take the edge off the sting.

“Sometimes I get a little too brave,” he said. “But ... I’ve been around bees long enough that I pretty much respect their instincts.”

On a cool, overcast day last week, most of Bean’s bees were holed up in their hives. He said they like to be warm and they’re more active when it’s hot — but not too hot.

Bean recalled observing his bees during this summer’s most sweltering days.

They wisely did their work before dawn and after dusk, relaxing in the hive during the hottest part of the day.

“They were pretty much beaten down by the heat,” he said. “They respected what it did to them and what it took out of them.”

Seeing nature at work is among Bean’s favorite things about keeping bees.

“You never stop learning,” he said.

• Honeybees perform a waggle dance to communicate the location of food sources that are 100 yards up to two or three miles from the hive.

• In one trip, honeybees visit 100 to 1,500 blossoms to fill their honey crop, an organ separate from their digestive stomach that is used to transport nectar.

• In its entire lifespan, a worker bee produces only 1 1/2 teaspoons of honey.

• In winter, bees live on stored honey and pollen and cluster into a ball to conserve warmth, maintaining a hive temperature that’s close to human body temperature.

• The beehive is a “super organism” where all the bees work together as a single entity. A lone bee cannot live on its own outside the hive.

After helping Richard, my friend and mentor for many years, I must add a piece of greatness about the Farm Tours participants. I get to talk with sometimes a hundred or more folks young and old, explaining about bees and beekeeping. But there is nothing more meaningful in that experience than upon being questioned by a young boy or girl, than to see how their eyes light up, and their minds begin to understand and bring out even more questions for me to explain! In all the years I've assisted Richard I've always gone home afterwards feeling proud to aim and enlighten people who attend, but those kids who you know may remember the old bearded guy giving them some special time, about something as special as Beekeeping. Please come see us ay 'Blossom Trail'...Mark