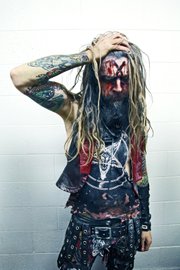 Veteran rocker and horror filmmaker Rob Zombie has bounced back and forth between recording, touring and making movies for 20 years now, finding his own brand of success in two endeavors that have each burned out more than a few creative minds.

Fresh off wrapping up his latest film project, Zombie will soon hit the road on the Twins of Evil Tour, a traveling circus of rock that pits him with Marilyn Manson. A seemingly natural double bill forged in the depths of hell, this marks the first time the two have toured together. They’ll be making a stop Thursday at the Kansas Expocentre in Topeka.

For his part, Zombie has promised no less than his usual multimedia stage show full of animatronic robots, giant LED screens, trippy light shows, pyrotechnics and a treasure trove of horror movie clips, all in support of his “band of maniacs” and signature growling vocal delivery.

“I can only speak for my half; I’m not sure what Manson will do. But our show is just a giant [screw] you to everybody. Giant psychedelic [screw] you. No, I’m just kidding. It’s celebrating everything that’s supposed to wrong with everything, so we love it,” Zombie says.

The tour is coming off the release of “Mondo Sex Head,” an album of remixes of Zombie songs handled by a slew of DJs, both underground and those well-known in the electronic dance movement scene. JDevil, the DJ alter ego of Korn’s Jonathan Davis, is among those who contributed remixed tracks; he was slated to back up Manson and Zombie, but recently pulled out of the tour because of health issues.

While an album of remixes may seem like the easy way to put new product in front of the fans, Zombie says it was more for fun.

“We have a new album that we finished, too. ‘Mondo Sex Head’ is just something to do for fun,” Zombie says. “We have an album of all new material, which we just finished that will be out early next year.”

The idea for another remix album was born when Zombie’s manager, Andy Gould, told him he was regularly hearing DJs incorporate clips of his music into their sets. The result was Zombie’s third remix album, following 1996’s “Supersexy Swingin’ Sounds” and 1999’s “American Made Music to Strip By,” both of which followed on the heels of the remix of “Thunder Kiss ’65,” the track that brought White Zombie to prominence in the early ’90s.

Given the different nature of the new album, it was road tested, but not in the traditional manner. Where most bands try out new songs on stage, Zombie tried it out while on the road alone, driving the streets of Los Angeles.

“Sometimes when you’re listening to the songs, they can seem ... they’re different, they’re not ‘structured’ songs sometimes. They can sound even boring maybe,” Zombie says. “I just happened to be in the car, driving at night, and I put it on and just kind of locked into the groove because I was doing something else. Driving’s a really good way to listen to music. So it struck me as that’s the first time I really ‘heard’ the record, because I’d sort of just been sitting down listening to it, focusing on it, which can get highly annoying.”

While touring and supporting new records is enough to keep most happy and busy, that is simply Zombie’s latest project. His latest film, “Lords of Salem,” recently premiered at the Toronto International Film Festival and will open to wider release in the coming months. Following his earlier horror efforts “House of 1000 Corpses,” “The Devil’s Rejects” and two subsequent “Halloween” remakes, one of which was No. 1 at the box office, “Salem” is a much more somber affair. The Los Angeles Times called it his “darkest, most unnerving film yet.”

A Massachusetts native, Zombie grew up near Salem, site of the infamous witch trials. The movie follows Heidi, a radio DJ in Salem, played by Zombie’s wife, Sheri Moon Zombie, who receives a mysterious vinyl LP that seems to hold strange powers over women when it’s played. Heidi finds herself falling into past troubles with addiction and the influence of three women with impure intent.

“I think it’s a different type of movie. It’s not a bloody, violent movie ... It’s more of a dark, psychological type of movie. So I think that overall, the other movies have, they were almost comedies in a way,” Zombie says. “Then the ‘Halloween’ films had Michael Myers, the ‘monster,’ so they had sort of a different vibe. This one is the most dark, depressing, psychological film. So I think that’s probably why (reviews) say that. And it is, but it’s not this violent; the whole tone of the movie is grittier.”

That gritty tone is at least in part due to Zombie being given complete creative control of the film. While it has the smallest budget he’s worked with, the funds came with no creative strings attached.

“The real difference with creative freedom is, I’d get my way on the other films, it’s not like I would be told what to do, it’s just a battle. And when you’re always fighting to get your way, it’s exhausting,” Zombie says. “So this time I didn’t have to deal with that. This film is different in a lot of ways. It’s a very unconventional movie. I don’t think I could have made this movie with studio executives trying to... well, studio executives try to make everything like everything else so we can make as much money as possible. And that really wasn’t my idea with this. Having complete control made a big difference and I think people have noticed it.”

While a studio executive might not sign off on all of his ideas, a lazier man wouldn’t sign off on such a full work schedule. But Zombie says he has no intention of leaning toward one of his artistic outlets over the other.

“I feel like I should keep both alive. Sometimes it can be easy to want to stay with one, because going back and forth gets very difficult at times,” he says. “But I love both, and both work as a great contrast for the other. Because making a movie is a very intense situation — you’re pretty much locked away the whole time you’re doing it, shooting, editing or whatever. And, you know, going on tour and playing shows is the exact opposite. So at the end of a long film project, I’m itching to play shows, and after a long touring cycle, I’m happy to stay home. So it’s a pretty good balance.”

Very disappointed the Westboro group is not scheduled to picket. They could have been more creative with the signs for this show.