A print of Gov. Sam Brownback — crying and apparently going down in flames — made it through a recent Lawrence gallery exhibit without incident. The same artwork did not last long at a Topeka restaurant, where building owners have removed it from an exhibit. 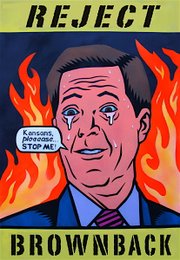 Artist Dave Loewenstein's painting of Gov. Sam Brownback was removed from a Topeka restaurant where it was on display. Loewenstein said removing the painting amounts to censorship, but the owners of the building that houses the Blue Planet Cafe say the image was taken down so as not to offend Brownback's daughter, Liz, who works there.

The difference? Brownback’s daughter doesn’t work at the art gallery.

Owners of the building that houses Blue Planet Cafe, 110 SE Eighth Ave., told Lawrence artist Dave Loewenstein on Wednesday that they removed “Reject Brownback” out of respect to Brownback’s daughter, a building employee. The print would have been displayed with several of Loewenstein’s other politically charged artworks through the month of October.

“This decision has nothing to do with politics or our belief in your freedom of speech through art,” Greg Ready, who along with Jeff Carson owns the Thacher building and Gizmo Pictures upstairs from the restaurant, wrote in an email to Loewenstein. “Liz [Brownback] is a valued employee and friend to us and I (we) felt strongly against subjecting her to having to look at a picture of her father burning at her place of employment.”

Loewenstein is decrying the removal as censorship. He said that while he understands no law was violated, he told the owners they overreacted.

“I just said I was really disappointed, I understand that they had the right to do it but that I thought their actions were way out of proportion for the reasons that they gave,” Loewenstein said.

Loewenstein said he questioned the owners’ motives because he does not know how Brownback’s daughter feels and has not personally spoken with her. He added that while he sympathizes with relatives of public figures, he also thinks they need to be prepared for criticism politicians may face.

Ready, however, said that the governor’s daughter may have grown up around criticism but that he stood by his decision to take down the print. He said he made his decision before telling her and that she did not influence the choice.

“I don’t think anybody could not think that was disturbing — anybody with a soul at least,” he said. “Try to picture going to work and seeing your dad’s picture in flames, no matter what his profession may be.”

Ready said he believes the artwork was hung conspicuously with the purpose of getting a reaction and that he “fell for it” — but that doesn’t mean the print is going back up.

“I felt that this was meant to be mean-spirited and spiteful, so I let my conscience make the decision,” he said. “And I hope that people will understand that and try to divorce the political side from the actual situation.”

Brownback’s office said the decision was made by private business owners and that neither the governor nor his family had anything to do with it but declined further comment. Liz Brownback did not respond to an email requesting an interview on Thursday.

Loewenstein said the flames in the picture aren’t actually licking at Sam Brownback, but rather are in the background — symbolic of the damage Loewenstein believes the governor’s policies are doing to the state. Loewenstein cited social programs, public education and public arts support as policy issues that especially concern him.

Michaela Carmen, the Blue Planet Cafe’s art curator, said the restaurant also was disappointed that the painting came down.

“We support local art,” Carmen said. “We are very anti-censorship in any art.”

Carmen said the cafe is honored to show Loewenstein’s work and expects it to be good for business. She said Gizmo employees walk through the entrance they share with the cafe to get to work and frequently come downstairs to eat lunch there.

“Reject Brownback” is a spray-painted stencil print last displayed in Lawrence at the Invisible Hand Gallery’s June Final Fridays show, “Friends of the Hand.” Loewenstein is best known for his public art, including the “Pollinators” mural at the Downtown Lawrence Farmers’ Market.

At Blue Planet Cafe, it was hanging with other prints of what Loewenstein calls “Kansas politicians gone awry.”

While the politicians in his “awry” series are all Republicans so far, Loewenstein said he’s watching Democrats, too.

“It’s not about the political party to me at all,” he said. “I would be equally critical of anybody who I felt like was harming Kansas.”

— The Associated Press contributed to this story. Features reporter Sara Shepherd can be reached at 832-7187. Follow her at Twitter.com/KCSSara.