Inside the world of food photography

Lawrence resident, professional food photographer shares tips for the rest of us

The advertising shoot where the customer asked the food stylist to turn each kernel in a bowl of corn so not a single rough end showed was somewhat extreme. 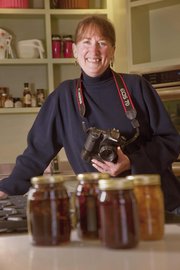 Lawrence resident Kathy Sanders Wilson, formerly a professional food photographer with a studio in Chicago, shot more than 100 covers for Better Homes and Gardens magazine, as well as photos for food advertisements, cookbooks and recipe magazines.

In more than 30 years as a food photographer, Lawrence resident Kathy Sanders Wilson painstakingly photographed everything from the perfect bowl of corn to flawless feasts for the cover of Better Homes and Gardens magazine.

Wilson’s portfolio is on film — mainly shot with an 8x10 Deardorff, a large stationary professional camera capable of swings and tilts that portable cameras aren’t. While the photography medium of choice has changed with the digital age, basic principals of food styling, composition and lighting haven’t.

Not unlike creating portraits of people, Wilson said, “you have to tell a story.”

Wilson moved to Chicago after graduating with a journalism degree from Kansas University. She worked in the personnel department for Sears before landing a job at a photography studio owned by a food photographer and a catalog photographer.

Wilson worked her way up from helping with food sets to taking her own photos, eventually buying out one of the partners when he retired.

In 2004, Wilson moved back to her hometown of Lawrence, where she and her husband, Jack Wilson, own Washington Creek Lavender Farm.

“I had always said when I moved to Chicago, I don’t want to get old there,” she said. “It’s a pretty fast-paced place.”

Wilson shot digitally for a few years before closing her studio but said she missed the creative control she had with film. Instead of perfecting details such as brightness and contrast through her lens, for example, a person at a computer took over that job.

Now, Wilson is taking a digital photography class in her spare time, aiming to learn the ins and outs of a D-SLR camera like the ones hobby photographers or photojournalists use.

“I suppose you never lose the love of it,” she said, adding, “I need to know how to make the machine do what I want it to do.” 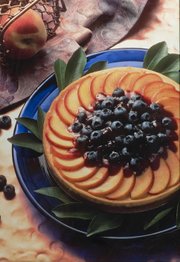 Whether you’re shooting food for your Twitter stream, a blog or even print publication, Wilson shared these expert tips that will help you make better pictures no matter your camera.

As a rule, subjects tend to look best when grouped in odd numbers.

And when it comes to a backdrop, look for colors the food would look good on. For example, since orange and blue are complementary colors, Wilson might place a peach tart on a blue plate.

Also consider balance. If the dish has a lot of colors, a solid background avoids making the shot too busy. Likewise, if it’s a solid-colored food, a patterned dish beneath it can help add interest.

Food doesn’t necessarily have to be in a serving dish, though. Try a loaf of bread on a tea towel, a baked item left in the pan or a rustic dish on a weathered wooden board.

Props can add color or context to a shot, or be strategically placed to balance a composition.

Wilson suggested considering the theme of your food and adding appropriate props, maybe seashells for a fish dinner, evergreen for a holiday dish or primary colored items for kid food.

Fruits and vegetables such as those used in the pie or casserole you’re photographing can add a fresh feel.

The angle you shoot from should be chosen to highlight the dish, Wilson said. “It pretty much is dictated by what the food is.”

Sandwiches, for example, are usually best when shot from the side to show their layers. But a side-shot wouldn’t capture the design of a beautifully arranged fruit platter, so try shooting that from directly above.

Straight-on flashes — like the ones on cell phones — can make subjects look “flat,” especially when it comes to food.

Prioritize one main light source, ideally placed to the left or right of your subject, Wilson said. Then add a little light to the opposite side of the subject by reflecting off a white card, mirror or piece of aluminum foil — you can even crinkle and unroll foil so the reflection isn’t too harsh.

Side light helps catch the glistening of juices on a hamburger or dressing on a salad, and the secondary light softly fills in shadows on the opposite side.

At point in her career, Wilson said, editors wanted everything in focus — the food, the plate, the table, the chair and even the curtains in the background. At another point, the fashion was photos with just a sliver of the subject in focus and everything else soft.

Set the aperture to your choosing, then adjust shutter speed and lighting for the correct exposure.

In an extreme case, Wilson said she once shot food in an whole-room setting with everything in focus, which required a 4- to 5-minute exposure.

Better Homes and Garden shoots always involved professional food and prop stylists, Wilson said, so she picked up a lot of tips.

Practices such as using red paint for meat juice or Brylcreem in place of milk (it doesn’t make cereal or other food soggy) aren’t ethical for editorial shots, Wilson said. But there are plenty of more natural ways to perfect the look of food if you want to spend the time.

A spray bottle of water creates a glistening look. Paint brushes to add oil or juices also come in handy. And a creme brulee torch can be good for spot-toasting food.

For mixed foods such as pasta and salads, stylists don’t scoop a serving out of the pot and onto a plate like you would at home. Rather, they “build” the dish on the serving plate, adding noodles, shrimp, vegetable pieces or whatever one layer at a time so the prettiest pieces rest on top.

And if you’ve ever wondered how pizza seems so cheesy when it’s served in advertisements, that’s a trick, too. For that perfect “pizza pull,” Wilson said stylists cut the slice, load the cut with extra cheese, then pull and shoot.

For a pristine look, Wilson recalls stylists cutting and plating a piece of casserole, then meticulously cleaning around it on the plate and even cleaning the space it left in the pan before the shoot.

Blue is a primary color along with Red and Yellow. Orange is a secondary color made from mixing Yellow and Red. Together, Orange and Blue are complimentary colors...opposite one another on the color wheel.