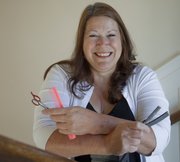 Vicki Rajewski, Topeka, is a barbering instructor to inmates at the United States Disciplinary Barracks at Fort Leavenworth.

Giving prisoners convicted of violent crimes razor blades in a confined space might seem like a recipe for disaster. Vicki Rajewski says it’s more of a recipe for rehabilitation.

Rajewski, of Topeka, works at the United States Disciplinary Barracks at Fort Leavenworth as a barbering instructor. She teaches about 16 prisoners a year everything they need to know to be a barber: how to cut hair, how to interact with clients and how to give a shave with a straight razor.

The goal: to provide prisoners with a livelihood on the outside.

She admits there are risks involved in her work, but she has rarely seen an incident more than a raised voice or a scuffle.

It might be a bit of a rougher crowd than she’s used to, but she said treating the prisoners with fairness and consistency goes a long way in earning their respect.

Rajewski explained that taking the class is a privilege. Applicants are screened beforehand and have short sentences remaining, and sex offenders are not allowed in the program. There are always guards in her barbershop inside the prison.

“We count the blades,” she said. “That’s the main thing. When they come to work they are given their tools, and when they go to lunch the tools are taken back.”

The prisoners also do their own sort of self-regulation.

“The other inmates don’t want to be less safe than you or I,” Rajewski said. “They are going to kind of steer people away that they don’t want in the program. Because there is that level of prison interaction that I’m not privy to where they say to someone, ‘No, no, no, you don’t want to do this.’”

The 14- to 15-month class she teaches, funded by the federal government, involves about 1,500 hours of book work and hands-on experience. After the first week of class, the prisoners are cutting hair. They have a pool of about 425 prisoners to practice on, as well as some of the prison guards.

“It’s unusual to think that staff members come in and get a haircut and sometimes a razor shave by the same inmates that they deal with every day, so you know it speaks for itself at that level of trust,” she said.

Completing her class and passing their exams earns the prisoners a barbering certification from the state of Kansas.

Besides providing a livelihood, Rajewski added that the program has a way of making the gray world of the prison seem a bit brighter. The class transforms the area from a place of confinement to a neighborhood barbershop where prisoners joke, relax and interact.

“It’s sort of that camaraderie that you build on that makes them more confident and more likable because that’s important within the barbering industry.”

This sort of transformation and the skills it provides inmates makes the job a “dream” for Rajewski.

However, reaching this dream took nearly a quarter century.

Rajewski, a barber for more than 30 years, decided she wanted to teach prisoners to cut hair about 25 years ago when she went to supervise a barber examination at the U.S. Disciplinary Barracks.

“I thought, wow, what an interesting place.”

She got her barbering instructor permit and a few year later was offered a position at the prison.

“The timing wasn’t right, and I thought, wow, there went my dream job.”

Seven years later, she was offered the position again. However, her husband had recently died in a car accident, and she had responsibilities.

“I thought, I had little kids and I can’t put myself at risk like that every day. It was just a dream I had to let go.”

Fast forward to 2008, and again the job became open on a temporary basis. This time, Rajewski had passed the age limit for the job, but because it was a temporary job, they hired her on for a year, and then another year. Rajewski’s position is now permanent.

“Third time’s a charm. It was 25 years ago and still is my dream job.”

It’s the sort of job where she feels like she’s making a difference.

“As you watch them become more confident, their skills improve,” she said. “You say and do things that I believe helps build that confidence. So you try to encourage them all that you have it all in your mind and you know everything you need to know to succeed at what you do. It’s the same as being a citizen, being a barber, being a parent, being a spouse. Hopefully that’s what they’ll carry forward.”