Lawrence artist Paul Punzo places items within an altar he created for a Día de los Muertos event Friday at the Lawrence Percolator, near Ninth and New Hampshire streets. Visitors are invited to create their own altars with pictures, mementos and decorations to pay homage to their loved ones.

About 10 years ago, the day came when Lawrence resident Laura Ramburg’s children were too old to continue to go trick-or-treating on Halloween. As a fan of the holiday, Ramburg wanted to continue to celebrate the special time of year but wasn’t sure how. She began to dig deeper into its meaning, and instead of continuing her Halloween traditions, she started participating in a different holiday.

She began celebrating Día de los Muertos and ended up finding more meaning and joy in this celebration than dressing up her children and taking them out to get candy. She made an altar honoring the lives of her deceased father and grandparents and decorated the space with flowers and artwork.

An altar created for Día de los Muertos is seen Friday at the Lawrence Percolator. The Percolator will have a grand celebration for the Mexican holiday this Friday that will feature food, artists and music. 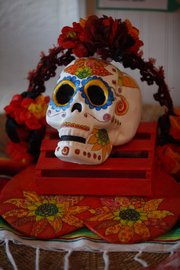 A Sunflower Shrine created by Susan Schuette Buchanan is pictured.

Día de los Muertos, also known as Day of the Dead, originated from the indigenous cultures of Mexico and is a public celebration in Mexico and communities of Mexican origin to honor and remember friends and family members who have died.

La Calavera Catrina: Women’s Imagery and Day of the Dead

• 5 p.m. to 9 p.m. Friday, Lawrence Percolator, Ninth and New Hampshire streets in the alley behind the Lawrence Arts Center

Day of the Dead celebration potluck with food, artwork and a band.

in the surrounding area

Listen to live music and watch the Kansas City Art Institute parade through the Westside Neighborhood in costumes.

The Mexican holiday takes place Nov. 1 and is connected with the Catholic holidays All Saints’ Day and All Souls’ Day, says Peter Haney, assistant director for the KU center of Latin American studies.

During Día de los Muertos, people visit grave sites, attend church services, make offerings and also make their own altars at home for their dead loved ones. Offerings at altars and graves include food, such as sugar skulls and breads, and art, such as paper flowers, masks, paintings and drawings.

Haney says the art connected with Día de los Muertos isn’t just visual; there are also many satirical poems and stories published and performed as part of the holiday. Some of them poke fun at public figures; others tell stories of cemeteries and what the afterlife, or rebirth, is like.

“It’s a way to celebrate loved ones who’ve passed on and reflect on the transitory character of life with a paradox of reverence and humor,” he says.

Since then, the celebration at the Percolator has grown. This year, participants can bring their own photos and offerings to place on altars already set up, or they can create their own altar.

“Talking about death and processing death is a very important thing to do, and our culture doesn’t do it very well, so I think there’s some work that needs to be done there,” Ramburg says. “This gives people a little bit more space to express their love and express their grief in positive ways.”

Despite the traditional offerings and honoring of loved ones, the celebrations of Día de los Muertos in Lawrence and surrounding areas is different than in Mexico or areas with a larger Hispanic population.

Valdivia-Alcala, a Mexican-American living in Topeka, says she had celebrated her loved ones through a full-time altar at her house but knew very little about the indigenous component of her heritage until she began planning the citywide celebration of Día de los Muertos.

“Our (Mexican) culture was continuing to be revitalized through celebrations ... (planning the event) we learned just as much and welcomed people into this that are not Latino,” Valdivia-Alcala says.

Much of the excitement surrounding the holiday is from the immigrant and Mexican-American community, Valdivia-Alcala says, but just as much, if not more, interest is generated from Anglo-Americans.

Ramburg is one of many who celebrates the holiday but is not Hispanic. She believes Día de los Muertos is about making death beautiful and “making something beautiful is a universal act.”

“I’m a human being, and this holiday addresses that, and a human being needs to honor and remember their people,” Ramburg says.

The celebration of Día de los Muertos is from 5 p.m. to 9 p.m. Friday at the Lawrence Percolator, Ninth and New Hampshire streets in the alley behind the Lawrence Arts Center, and is free and open to the public. There will be a performance by El Día de los Muertos Community Band as well as food and art. Guests are encouraged to bring photographs and other offerings for the altars.

Leave it to the indigenous. Once the well intentioned try to popularize it, I guess to validate their insecurities, something good and thoughtful becomes more shopping bags and Hallmark cards. Next thing there will be orange ribbons.

uh, not all Mexicans are "illegals"...your attitude is completely reprehensible.