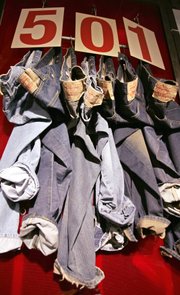 A Levi's 501 jean display is seen at the flagship store Oct. 11, 2005, in San Francisco. These days, our country’s (arguably) best-dressed men can often be spotted wearing field jackets, chambray work-shirts, duck canvas pants, selvedge denim and tweed. It’s clothing you might have expected to see on farms and in factories, or even “when you were younger.”

As a graduate student in history and a fashion fiend, I’m a total sucker for classic clothing with a rich historical pedigree.

For me, it’s a great feeling to wear something that I know has changed little in its long history, simply because it doesn’t need to. I suppose the old adage “if it’s not broken, don’t fix it” fits certain fashion classics perfectly.

Take jeans, for example. You can go out and buy denim in literally every color now. You can get them with enough thread and “bling” on the back pockets to set off a metal detector, and there are so many styles available that it’s hard to know where to even start.

With such a daunting array, I always recommend going back to the basics — in this case, Levi’s 501 blue jeans. A classic straight fit with no bells and whistles, you can never go wrong with these hard-earned champions of denim lore.

Denim’s use as a tough, working-grade fabric stretches back into 17th century France and England, but our story doesn’t start until Loeb “Levi” Strauss opened his dry goods store in San Francisco in 1853.

Strauss’ business was going well enough, but in 1872 everything changed when he received a letter from a Reno-based tailor named Jacob Davis.

Davis had made denim jeans more durable by using metal rivets at stress points and needed a business partner. Strauss quickly signed on and began manufacturing sturdy denim, metal-riveted “waist overalls” (the old name for jeans) in 1873 — a big step above the generally shoddy offerings at the time. The classic 501 jean was born in 1890 when, upon losing his exclusive riveting patent, Strauss began marking his jeans with the distinguishing numbers “501.”

Although 501s captured the American imagination in the 1930s when Western movie stars like John Wayne wore them on the big screen, they were only available west of the Mississippi and were generally considered the outfits of the working classes.

Only after World War II did Levi’s go national (and eventually international) as the post-war production boom, combined with a vision of jeans as leisure wear, opened avenues on the East Coast.

Because subcultures like the “Greasers” adopted 501s as part of their official uniform in the 1950s, however, many viewed jeans as worn only by “juvenile delinquents.”

While those who rebelled continued to adopt 501s as standard style after the 1950s, so did the rest of society — the Levi’s 501 emerged as an American style icon in the 1950s.

While the Levi’s 501 didn’t assume its modern form until 1947, it continually changed thereafter to fit the times, losing thread during WWII, slimming down in the 1970s and 1980s, and loosening back up in the 1990s.

Observing the history of the Levi’s 501 is really like looking at the history of American fashion. This singular article of clothing has both defined and adjusted to our changing taste.

By now, Levi’s 501s reflect American fashion’s internationalization more than ever, with colors and fabrics to fit every lifestyle and the availability of iterations of classic 501s spanning back to 1890.

Yet 501s have never strayed from their heritage — the iconic red tab (patented in 1936), the “arcuate” stitching on the back pockets (patented in 1943), the straight fit and their standard, tough quality all remain intact. I guess some things are better left unchanged and will simply never go out of style.

— Vaughn Scribner can be reached at go@ljworld.com.

I've worn 501's in 32-34 for decades. They are now made in Egypt and aren't worth a damn in quality or wear and the fit isn't good. Levi Strauss sold their soul long ago. I won't be buying them any more.

While the entire thing sounds like a press release, the last paragraph contains some of the most laughably incorrect statements I've read in a long time.

Sadly, anyone who has loyally worn Levis for more than a couple of years knows how far the product has fallen.

I deal in vintage clothing, and I've seen some pretty cool Levi's pieces over the years. An old timer the other day told me about cleaning out his grandparents house and throwing away some wide legged Levi's with buckles on the back. I didn't have the heart to tell him that those were worth several thousand dollars apiece. And, I wanted to cry myself. People still throw out valuable jeans every day in Kansas because they can't imagine they'd be worth anything.

Levi's are made from crap material now. Used to be a pair would last you forever (and you could find cool used & vintage ones), but the material they use these days is so thin - they're junk. Some makers have higher end lines with all cotton, thicker denim like it used to be made, but they cost too much. Where are the good, built to last jeans that don't cost $100 these days? Even the used/vintage ones have been snapped up I think. We should make quality stuff again, here in the USA. Hey, Levis!