Scott Heffley, senior conservator of paintings at Kansas City's Nelson-Atkins Museum of Art, examines the Spencer Museum of Art's painting by Giorgio Vasari. Heffley conserved the work as part of the preparation for the Spencer's exhibit, "Giorgio Vasari and Court Culture in Late Renaissance Italy." 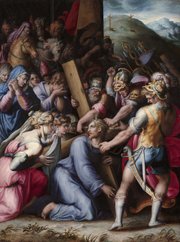 The painting “Christ Carrying the Cross,” by Giorgio Vasari, circa 1555-1564, is pictured. A new exhibit at Kansas University’s Spencer Museum of Art, “Giorgio Vasari and Court Culture in Late Renaissance Italy,” featuring the painting, opens Saturday. 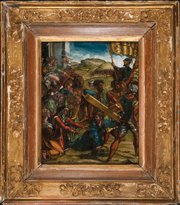 In devising his composition for “Christ Carrying the Cross,” Giorgio Vasari borrowed from several works, including this copy of Raphael’s “Lo Spasimo di Sicilia,” a reverse painting on glass that will be part of the Spencer Museum of Art’s Vasari exhibit.

Perhaps more intriguing aren’t the people who appear in the circa-1555 painting, but rather those surrounding its history — a cast including Vasari himself, Michelangelo, a Benedictine monk, a beautiful young widow, a Kansas City art conservator and even a notorious New York criminal.

“Giorgio Vasari and Court Culture in Late Renaissance Italy,” an exhibit opening Saturday at Kansas University’s Spencer Museum of Art, highlights the small-but-significant painting’s recently cinched true identity and rejoins it with some of its influencing forces.

“It recognizes that the art wasn’t created in a vacuum,” says Crystal Hall, a KU assistant professor of Italian whose specialty is Renaissance and early modern Italian literature, which also makes an appearance in the exhibit. “It wasn’t isolated from the rest of the cultural events and cultural artifacts from the period.”

“Christ Carrying the Cross” is the star of the show, which runs through Dec. 9 at the museum. The Spencer purchased the 17-by-23-inch painting in 1953 and has displayed it for years, but it never took a lead role until KU associate professor of art history Sally Cornelison proposed the exhibit, which she curated with the Spencer’s European and American art curator, Susan Earle.

“The painting revealed itself to be so much more interesting and complicated than I ever guessed,” Cornelison says.

The painting’s ownership is documented back to 1580, though “Christ Carrying the Cross” was attributed to the workshop of Vasari rather than the master himself.

Over the years, some scholars have disputed that.

A year and a half ago, Cornelison delved into researching the painting herself. She traveled to Italy, studied works created by Vasari, his workshop and other artists who influenced him, read books Vasari wrote, consulted other experts and researched the painting’s chain of ownership.

“Is this really Vasari?” she would muse. “It was the one thing that would keep me up in the middle of the night.”

In January, an expert at the Nelson-Atkins Museum of Art in Kansas City, Mo., completed a restoration of the painting. Working mostly nights and weekends over the course of six months, senior conservator of paintings Scott Heffley stripped away old, yellowed varnish to reveal nuances that solidified Cornelison’s theory.

“There’s really no doubt that it’s Vasari,” she says.

The Spencer’s painting is a small copy of an altarpiece a Roman noblewoman commissioned Vasari to paint.

Ersilia Cortese was a popular character in the papal court, often praised in poetry and other art forms, Hall says. Widowed at 23, she was young, beautiful, wealthy and connected to the pope (her late husband’s uncle became Pope Julius III).

Cortese is thought to have commissioned Vasari’s altarpiece for a chapel in her home, but she never claimed the finished work. The noblewoman left Rome under “shadowy” circumstances, Hall says. Outside research suggests Cortese had an affair with a Cardinal, or that a dispute prompted the sitting pope to destroy her family’s fortune and exile her from Rome.

The altarpiece has been lost, Cornelison says. But, fortunately, Vasari created the copy for his friend, Vincenzo Borghini, a Benedictine monk and art lover who helped develop decorative schemes for some of Vasari’s work.

“Christ Carrying the Cross” remained in Borghini’s collection — along with “The Conversion of St. Paul,” another small painting by one of Vasari’s contemporaries — until his death in 1580.

“Christ Carrying the Cross” and “The Conversion of St. Paul” would remain side by side for the next 373 years.

The paintings stayed in Italy until 1902, when a wealthy New York couple bought the pair at auction for their personal art collection. In 1930, they were purchased by New Yorker Sam Schepps, who dabbled in antiques but was better known for organized crime. Schepps, Cornelison says, was accused of being involved in a murder, convicted of forgery and eventually died in prison.

In 1953, KU bought “Christ Carrying the Cross” at auction — but not “The Conversion of St. Paul,” separating the paintings for the first time.

“KU could only afford to buy one,” Cornelison says.

Vasari, sometimes called the first art historian, is arguably better known for his writing than his painting, Cornelison says.

He penned the often-referenced “Lives of the Most Excellent Painters, Sculptors, and Architects,” a compilation of artists’ biographies that was among the first of its kind.

Some of Vasari’s favorite artists to mimic are mentioned in the book, including Raphael and Albrecht Dürer. He was also particularly enamored with Michelangelo and wrote a separate biography about him.

Both volumes happen to be among the rare early modern Italian books owned by KU’s Spencer Research Library.

In addition to original artworks by Dürer and representations of works by Raphael and Michelangelo, 13 of the Spencer Research Library’s books will be on display in “Giorgio Vasari and Court Culture in Late Renaissance Italy.”

Hall and Cornelison are excited about that.

“They’re not languishing up there with just me going to look at them,” Cornelison says. “People are going to see these literary treasures that we have, as well.”

The exhibit also brings “Christ Carrying the Cross” and “The Conversion of St. Paul” together again after almost 60 years apart.

In addition to loaned works from the Nelson-Atkins and New York’s Metropolitan Museum of Art, the exhibit will feature “The Conversion of St. Paul” on loan from Bob Jones University, which purchased it when KU purchased “Christ Carrying the Cross.”

“Those paintings were actually together for longer than they have ever been apart,” Cornelison says.

Fascinating story. Thanks so much.