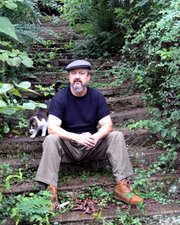 He coined the term “country noir” to describe his work, and lived to regret it.

He’s written what he calls “straight crime,” particularly evident in his “Bayou Trilogy” collection of early books, and what he calls the Civil War book, “Woe to Live On,” which features Quantrill’s Raid and was made into the 1999 Ang Lee film “Ride with the Devil.”

That last one isn’t quite historical fiction, he says, “because I don’t have an interest in telling you how soap was made.”

But he does have an interest in the Ozarks. After years living elsewhere — including Lawrence — he’s back living 100 feet from where his mother was born.

West Plains, Mo., became an inspirational setting for “Winter’s Bone,” his 2006 novel about young girl living in rural Ozarks country who’s trying to find her meth-addicted father to save their home from a bondsman. “Winter’s Bone” is the selection for the Lawrence Public Library’s 2012 Read Across Lawrence program.

Woodrell is a graduate of Kansas University and the Iowa Writer’s Workshop. Fresh from a tour across Europe and ahead of appearances in Lawrence, he spoke about his books, his connection to rural life and his advice for writers.

Alex Garrison: How does it feel to come back to Lawrence?

Daniel Woodrell: Well, I met some key figures there, and school was good for me after I left the Marines. The library there was a revelation — everything I was interested in — old literary magazines, anything — they could find it. It was magical.

I grew up in St. Charles, and then in Johnson County for two years before I fled, so I always knew about the border wars, but it was the KU research library that exploded the Civil War book into my consciousness — to see the letters firsthand and to get a sense for characters.

AG: Reading about you, there’s a lot of talk about genre and how you’re defining a new one with crime books about rural life. What do you think about that?

DW: The country noir thing, that got wrapped around my throat; I don’t feel like the recent books reflect that, so I’m changing. That’s what keeps it fun. I could have never just hit upon characters and settings and done 15 of those; that was never going to hold my interest. Someone asked me what I’d like to do after the books I’m working on now, and I told them the truth: That I actually really like romantic comedies. They thought I was joking, but I actually do!

AG: I’m fascinated with how many people right now seem to be fascinated by methamphetamine — not in getting involved with it, but like it has a pop culture effect. What do you think about that, and about your book being associated as “meth literature” or part of “meth culture”?

DW: In Germany, they used the term “white trash” to describe me as if I should be thrilled to hear that — like saying “neo-expressionist.” (Laughs.) I had to point out that it’s not a term of endearment.

The meth culture thing, the fascination, to me, it’s kinda funny. I thought I was delicate about meth in the book — I didn’t show long scenes of how to cook it like something in “Breaking Bad,” which is a show I admire. The idea of “meth culture” as a social problem has caught on so strongly in the last 10 years ... some people may be relatively new to understanding it, but not in the neighborhood I’m speaking to you from. It’s been a long time here — to me, it’s a “cow’s out of the barn” story. What I’m hearing now is that heroin’s becoming readily available in these small towns.

AG: It’s a part of a lot of people’s lives, especially where you live. Why do you think that is?

DW: Neighbors on both side of me have been involved in meth for the past 15 years. One has cleaned up, the other still cooked until last summer. I’ve seen people doing crazy things in broad daylight, but the only time I’ve been scared is when people have been out of their gourds on meth — up five days straight, and there was 10 to 15 of this often. But it’s improved, cleaned up. The rental houses have been bought and it’s different when you own a place, or when you’re trying to own.

Most of the people around here, if you can get full-time work, you make under $20,000 a year. You can cook over a weekend and clear $3,000. It’s difficult to tell people, “Please, don’t do that.” I do, but I also see how it’s hard to resist. Some of the people in this neighborhood, we got along rather well. We just didn’t talk about that aspect of life. I recognize the human element to all of it. With the money, I understand the appeal. And then some of them are just the scum of the earth. When the last neighbors were bad, all of us were scared. And it was difficult to watch because they had multiple children.

AG: I think people in Lawrence might have a better understanding of the area than a lot of people in the country — not the dark side of it, but just because we’re physically close.

DW: Overall, it’s a pretty and pleasant place to live. The small-town, Ozark-y values of kindness and helping one another, those are just as true as the meth stuff. That’s a subculture — readily observable, but by no means dominant.

AG: Is the connection to the Ozarks a generational thing for you? How do you think it affects what and how you write?

DW: My family’s been from here since 1838. I felt pretty good in Lawrence, but other than that, I enjoyed places but I didn’t feel connected to them. Here, I felt that — much to my, I won’t say alarm, but surprise.

I began to realize how much that was soaked into me, into the bone. I didn’t want to write about the Ozarks — I didn’t think anybody was interested. But then we moved to San Francisco, and suddenly I started writing about the Ozarks.

AG: Do you have any advice for writers?

DW: I always wanted to be a writer, but I moved to Lawrence when I was 23, and that’s when I decided I’d put all my eggs in this basket and see if I could do it. It took 10 years, but that’s a pretty usual amount of time, it turns out.

I say you should write what you like. A lot of the 30-year-old writers now, they’re not at all bashful about claiming a popular fiction background. That wasn’t the case in my generation — you had to pretend you were laying around reading Proust all the time.

Then be sure you have a feeling for doing it — often, all you get out of it is your own joy. But if you do have a passion for it, that usually means there’s something there, you’ve just got to quest to find it. The frustration is part of making the pearl.

AG:“Winter’s Bone” is a literary book about some very hard lives. Do you think you help redefine literary fiction so that it doesn’t have to be always haughty —

DW: Haughty and without plot? (Laughs.) That’s how some people define literary fiction. But all that’s getting blended around now. To me, it’s like an American form of music. If a jazz man hears a lick from Erik Satie or Strauss or whomever and it fits, they grab it. I just think of writing like that — it’s a big river and you throw your bucket in and pull out what’s there at the time. If I can get a lick from a painter’s attitude or a filmmaker’s, I’ll grab it. I’m completely a magpie that way.