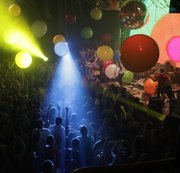 Liberty Hall turned 100 this year, celebrating with style in the form of a two-day, sold-out extravaganza performance (and street party!) from the Flaming Lips and proving it’s not too old to rock. Read more of our write up on Liberty Hall.

Cowboy Indian Bear is an indie band of the 21st century — deep local ties and solid support, but also a keen eye to digital self-promotion and a willingness to experiment. Why did our readers choose Cowboy Indian Bear? Read on...

If you like your local commentary seasoned with wit, sex and booze, look no further than the Larryville Chronicles, happily residing on Blogspot after all these years. Chip and Richard chime in being named best blog.

Best Place to Watch a Game

If you can’t catch the Jayhawks at Memorial Stadium or Allen Fieldhouse, our readers say Johnny’s Tavern is the best place take in a game. With its big TVs, legendary burgers, specialty pizzas and long list of libations, Johnny’s caters to fans of all tastes. Why is Johnny's No. 1 in our readers' hearts? Read on to find out.

Best Place for a Date:

Fake Joe Dooley, a parody of a Kansas University assistant basketball coach, was named best Twitter account in the 2012 Best of Lawrence contest.