346 Maine in the Medical Arts Building 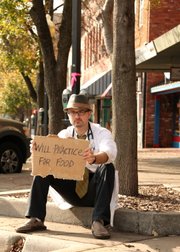 Dr. Ryan Neuhofel opened a new family practice in November in the Medical Arts Building, 346 Maine. Neuhofel doesn't accept health insurance or other third party plans, instead he charges fees for services. He's also willing to barter. Neuhofel said he had fun promoting his business this fall in downtown Lawrence.

Dr. Ryan Neuhofel is not only new to Lawrence, he’s bringing new ideas to family medicine. His goal is to bring back old-fashioned medicine, where a doctor has a relationship with his or her patients.

He believes the insurance industry tends to dictate the relationship and the care patients receive, so he’s taken it out of the equation. He doesn’t accept insurance; instead, he charges a monthly fee and a fee for services.

“It’s basically me having a relationship with my patients and being upfront and honest with no barriers, and me trying to do what’s best for my patients as opposed to trying to manage an army of coders and billers,” he told us in November before his practice opened.

Neuhofel, who goes by Dr. Neu, is ahead of the curve when it comes to innovative ways to interact with patients and educate them about health issues. He’s active on Facebook, writes a blog and uses Twitter.

He also hosts free classes that are open to the community. A video he created, “Hemoglobin A1c: Candy Shell,” about a lab test for diabetes was posted on YouTube in August and earned a mention in Forbes magazine.

“I love visiting with patients one-on-one, and I love talking to people and having that personal relationship,” he said. “But it’s not very efficient for education, and so if I can educate 10 or 20 people by making one video or making one comment on Facebook, it’s just much more efficient.”