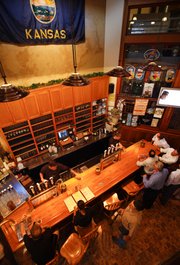 The Free State Brewing Co., 636 Mass., was readers' choice for Best Restaurant in the 2012 Best of Lawrence contest.

Queen Lizzy’s mission is “Bringing a taste of Great Britain to the Great Plains.” It may have imported a new taste to Lawrence, but the local enthusiasm is homegrown. Here's why.

Every tropical drink comes with a toy. The building is lime green. There are hurricanes — if you miss the nightly 10 p.m. storm, you can buy one on command for $20. You can dance on the bar (in a mermaid costume!). We'll join you for a fruity cocktail in our write up.

Dave Johanning, a managing partner at Sandbar, has been bartending there going on 17 years. He helped with a few things we’ve always wondered about Sandbar but were afraid to ask.

Barista Adam Lottt, 28 sips one his his brews at LA Prima Tazza, 638 Mass. was chosen as the best place to get a cup of coffee in Lawrence.

The Jayhawker Bar at the Eldridge, 701 Mass. 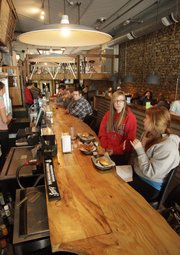 The Burger Stand at The Casbah

Zen Zero, 811 Mass., was voted Best Vegan or Vegetarian Food in the 2012 Best of Lawrence contest.

Sylas and Maddy's, 1014 Mass., was voted Best Ice Cream and Best Dessert in the 2012 Best of Lawrence contest.

Best meal in a hurry

Perhaps if Old Chicago was still here, it probably would've made the runners-up for best pizza...

Why does El Mezcal keep winning? Their food is bland and horrible. El Potro, a new Mexican place on 31st where Backyard Burgers use to be is awesome. Zen Zero also over rated. Try Oriental Bistro on 23rd.

Papa Kenos and On The Rocks should have won.

Someone needs to learn how to spell Mexquisito!

I think The Basil Leaf makes the best Italian food. I'm surprised not to see them in runners up!

Will Soo 9 years, 3 months ago

Winning some of these categories seem easy enough. I'll open a Mexican restaurant and smother over cooked meat with white cheese sauce and pour 4 shots of tequila in a margarita that calls for 1. Then I'll open a Chinese joint and double the MSG and sugar. As for Italian? No problem. Boil dried pasta till it's way past al dente then pop open a #10 can of tomato sauce and sprinkle Kraft parmesan (no parmigiano reggiano here) and parsley leaves on the rims of each plate. Surprised McDonalds didnt make the list for best burger.

Yes , I think Paisano's is best Italian restaurant . Best of all is Cork & Barrel Wine & Spirits, this bar has great collection of wine and all other kinds of liqour.

BellaRoca cakes shoulda got best bakery or best delivery. they r so delicious. but muncher's is good too..