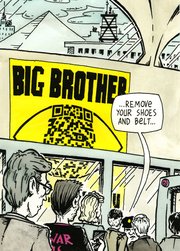 The Lawrence Public Library is celebrating national Banned Books Week 2012 in a new way. The library invited artists to depict their favorite banned book and chose seven designs to feature on trading cards, to be given out to the public throughout the week.

Banned Books Week started in 1982 as a response to a surge in the number of challenges to books in schools, bookstores and libraries, according to information from the Lawrence Public Library. Since then, more than 11,300 books have been challenged.

Last year, 326 challenges were reported to the Office of Intellectual Freedom, with the 10 most challenged titles including books new (most targeted at young adults) and old.

Barry Fitzgerald is both artist and avid reader.

When he heard about the Lawrence Public Library’s call for artists to create banned-book-inspired images for trading cards, he wanted to give it a whirl. And what better fodder then despotic pigs?

Fitzgerald’s painting depicting themes from George Orwell’s “Animal Farm” was one of seven picked for the library’s project, a collaboration with the Lawrence Arts Center to celebrate Banned Books Week, which kicks off today.

Libraries nationwide recognize the week every year, but Lawrence library leaders think the trading card project is the first effort of its kind in the country.

“We don’t think it’s ever been done this way before,” library marketing director Susan Brown says. “It was a neat way to engage the arts community on an issue that affects us all.”

The seven winning artworks were turned into trading cards. On the back of each card are descriptions of why that book was banned and what about it inspired the artist.

The library will release a new card to the public each day, so patrons can collect all seven by the end of the week.

Fitzgerald, a Lawrence resident and professor of design at Kansas University, picked “Animal Farm” because among the books on the banned list, it was the one he remembered best.

“I saw an animated version of it when I was in first grade,” he says. “I’m not even sure who thought that was a good idea ... but it made a real strong impression on me.”

After reading the book as an adult, its message sank in.

“Now that I’m a grown-up, I’m a big fan of symbolism and metaphor and imagery in storytelling, and that book’s just loaded with it,” he says.

Fitzgerald’s bold, graphic design features a barn with a stylized pig hoof descending down on top of it to symbolize pending danger and the control the pigs had over all the animals, he said. The limited color palette includes pinks — the color associated with pigs — and reds — alluding to the Russian revolution.

“Animal Farm” was banned in both Soviet-era Russia and the United States for its political theories, according to the library’s information on the trading card.

Not everyone supports Banned Books Week.

Focus on the Family, one of its best-known opponents, has historically complained that the event misleadingly highlights books to which parents have protested but libraries have generally not actually pulled from shelves — making them challenged but not banned. The group has objected to children having access to material, such as sexually explicit literature, in school libraries without parental consent.

To counter Banned Books Week, the group encourages families to donate books depicting a “faith-based and socially conservative viewpoint on hot-topic issues such as homosexuality and abortion.”

“One of the tenets of librarianship is that people should be allowed to read what they want to read,” Brown says. “If you think that this is inappropriate, don’t read it.”

A $1,000 grant from the Freedom to Read Foundation enabled the trading card project.

In addition, the Lawrence library is planning a Banned Book Read-Out from 1 p.m. to 4 p.m. Saturday in the library. A “Cozy Up with a Banned Book” installation — featuring an open-to-the-public chair, lamp, table and stack of banned books — will be open all week.

Test your knowledge of banned books. There’s one question about each book featured in the Lawrence Public Library’s Banned Books Week trading card project. Answers below, in italics.

1. What was the part-time occupation of the woman with whom Harry, the lead character in John Updike’s “Rabbit, Run,” has an affair?

2. The state of Tennessee banned this book, which offers a nonbiblical explanation for mankind’s existence, for a period of 42 years.

4. What is the name of the aliens, described as resembling upright toilet plungers with a hand on top, who abduct protagonist Billy Pilgrim and exhibit him in a zoo along with a B-movie starlet, in the book “Slaughterhouse-Five”?

5. One of the most censored titles, chief complaints regarding this George Orwell book include being pro-Communist and sexually explicit.

6. The Nazi party burned books by this author, who wrote “Call of the Wild,” because he had an infamous reputation for being an outspoken supporter of Socialism.

7. What was the character Little Red Riding Hood carrying in her basket that prompted the fairy tale of the same name to be banned?