Lawrence pinup photographer Emmalee Schaumburg of Bombshell is pictured in her studio, 613 N. Second St., on Aug. 13, 2013. When asked how she gets her clients to rid themselves of photoshoot jitters, Schaumburg joked, "We serve wine." 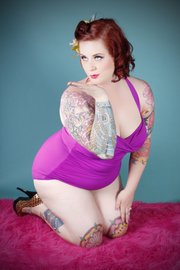 Lawrence is home to two photo studios that offer pinup portraits, and photographers say the style’s feminine vintage fashions and playful posing result in both a fun experience and finished products that look sexy without being sleazy. Here are some examples of their work.

Be a pinup girl

When she had pinup portraits taken last year, Kay Traver says she was the heaviest she’s ever been.

After winning a photo session at a charity auction, the 6-foot-1-inch blonde worried she was crazy for going through with the shoot when she did. But as she discovered upon seeing her proofs, there’s something about turning your head just right and sticking your bum out just so that makes any woman look fabulous.

“I looked so much better than I thought I did,” Traver says. “It was just absolutely amazing.”

Lawrence is home to two photo studios that offer pinup portraits, and photographers say the style’s feminine vintage fashions and playful posing result in both a fun experience and finished products that look sexy without being sleazy.

And, they say, the look works for ladies of all ages and all figure types.

The most famous pinup inspirations include glamour girls like Marilyn Monroe, Bettie Page and Betty Grable. Painters such as Gil Elvgren and Alberto Vargas — whose illustrations for Esquire now belong to Kansas University’s Spencer Museum of Art — also are known for their depictions of the female body, sometimes wearing more clothes than others.

Megan Birzer of Kansas City, Mo., who's been pictured in pinup magazines under the stage name Meg Boulette, describes pinup as a fun hobby and an up-and-coming form of artwork.

Birzer, who has done several shoots at Atomic Photography, says she gravitates to the classic "cheesecake" look — cutesy and smiling yet seductive — and loves the cat-eye makeup, red lips, bigger-the-better hair and girly retro outfits.

"You can’t not feel sexy in some back-seam panty hose and a pair of high heels," Birzer says. "Of course you’re going to feel fabulous.”

Major started shooting pinup portraits in 2009 after moving to Lawrence from Kearney, Neb. She and friend Jen Young worked on location or out of Young’s garage until March of 2012, when Major opened her studio at 313 E. Eighth St.

She says most of her clients have photos taken for husbands or boyfriends, or sometimes to mark a milestone in life. Her most popular themes are sweet, housewifey-type shots, but for photos that will be private, many women bare a lot more skin. Her studio is full of props ranging from a bright yellow rotary phone to a green, vintage bicycle, with backgrounds in a variety of candy colors.

She has an assortment of vintage outfits and sexy shoes, and also encourages clients to bring their own if they find something they love.

Major does most of her own clients’ hair — 1940s victory rolls are her go-to style — and makeup — bright red lips and bold eyeliner. She says she loves seeing women come out of their shells after they’re all dolled up and start posing under the lights.

“It doesn’t matter what body type you are, you can feel good and look great,” Major says.

At Bombshell, photographer Emmalee Schaumburg cites Elvgren’s paintings as her favorite inspiration — think themed outfits, pursed lips, coy smiles and looks that say, “Oopsie, I swear I was just standing here when that car raced by and blew my skirt up!”

Schaumburg provides vintage clothing, hairstyling and minimal makeup for her subjects, and poses them meticulously to ensure their fingers are just right and camera angles flatter. A labor-intensive digital editing process gives Bombshell photos their signature Elvgren-like hand-painted look — flawless rosy cheeks and bold, sultry eyelashes are actually added digitally, as are most of the scenes and props in the background, Schaumburg says.

Carol Ann Zuk and John Gladman founded Bombshell in 2010 and have since moved to Las Vegas and are shooting Bombshell photos there. Schaumburg now is in charge of Bombshell’s Lawrence location, operating out of the same North Lawrence building that houses her Schaumburg Photography studio, 613 N. Second St.

She was relieved when Schaumburg put her at ease, listened to her body image concerns and made sure every pose was just right.

Donna McCain, of Lawrence, had Bombshell photos taken earlier this year, just before she turned 70. In addition to a typical pinup style lingerie shoot, she had a second portrait taken with her husband of 52 years, Fairley McCain.

Their flirty photo is set in an Italian-esque garden, with him standing in a dapper driving cap, collared shirt and slacks, and she seated in a pencil skirt, polka-dot top, brimmed hat and red high heels — ankles crossed, hand behind her head, looking up into his eyes and smiling.

While part of the background was digitally created, the glasses of red wine they’re holding were real, which Donna McCain says didn’t hurt when it came to relaxing.

“Men don’t usually like having photographs taken, but my husband had such a good time,” she says. “We had such fun.”