Eric 'Mean Melin' Melin: 'Air guitar is in my blood'

Lawrence's Eric Melin, known on the air guitar circuit at "Mean Melin," takes it to 11 and wins the world air guitar championships in Oulu, Finland 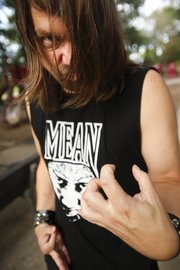 The top-10 finishers at the 2013 World Air Guitar Championships in Oulu, Finland:

Eric “Mean Melin” Melin booked a last-minute flight to Finland on a prayer — make that an air prayer.

After coming in second at the U.S. Air Guitar National Finals Saturday in Los Angeles, Melin hadn’t actually qualified to compete at the World Air Guitar Championships in Oulu, Finland.

But, fortunately for Melin, in the sport-slash-performance-art known as air guitar, there’s this little thing called a Dark Horse round. (Of course.)

This qualifying event on the eve of the championship offered a way into the finals for its top finishers. Melin knew it was a long shot, but felt like he had to go for it.

“There’s also something addictive about hope," Melin wrote this week in a column for Lawrence.com. "It keeps you going."

With a little funding from “Mean Melin” T-shirts that supporters have been buying online, and encouragement from his girlfriend and other air guitar players — including San Diego’s Jason "Lt. Facemelter" Farnan, who edged him out for the U.S. title — Melin jetted to Finland.

He won the Dark Horse round. And today, despite having a lousy second slot in the playing order, he riffed and thrashed his way past 16 other competitors from Europe to Japan to win the world championship.

“I have no idea what I did to win except put my heart and soul into every moment on stage,” Melin wrote in an email shortly after today’s victory. “And I think that the crowd might have been able to feel that, and knew that air guitar is in my blood and not just some silly throwaway thing.”

This was supposed to be Melin’s last year competing in air guitar. He’d played at the U.S. finals four previous years without a victory — which, he said in an interview earlier this month, seemed like a sign it might be time to hang up his virtual guitar.

Looking to make the most of his presumed swan song, Melin started planning his routine way back in November. While most air guitar players play along with tracks from known artists, Melin — the drummer for local band the Dead Girls, and also the Journal-World's movie critic — composed and recorded his own music with help from a friend.

It all paid off, and it looks like this year won’t be his last performance after all.

“I have to come back and defend the title next year here in Finland,” Melin said, “which is insane.”

Nice job Eric! Sara, is there any video to enjoy the moment?

Check out the article, "For air guitarist, ‘666’ a good sign of face meltings to come". It has a video to watch of Eric.

I guess it is another slow news day, what with the gas attacks in Syria and some idiot army man who wants to be women after being convicted of being a traitor.

Gotta have something for the front page!!

Air guitar!! Really! Why don't those folks spend their time really learning how to play a musical instrument rather that engaging in this silly pastime.??

"Air guitar!! Really! Why don't those folks spend their time really learning how to play a musical instrument rather that engaging in this silly pastime.??"

Making a nasty comment about an article about air guitar! Really! Why don't you spend your time learning how to play a musical instrument rather than engaging in this silly past time?

I have a degree in music education. I can play professionally several instruments.

To me, this is a silly pastime.

Yeoman2, just so you know Eric does play music for real. He was actually in one of Lawrence's more famous bands in the 90s (Ultimate Fakebook). He has fun with this. Don't be a hater.

Yoeman2: just because LJWORLD does not do a great job of including all the info does not give you the right to judge. Eric is the drummer for a band called Dead Girls (formerly Dead Girls Ruin Everything). He is also is the LJWORLDS movie critic, which they also forgot to mention in the article. Your comment is solely based on lack of reporting, not talent.

I too can 'air guitar.' I can air guitar in a more intricate manner than the winner without incorporating the exaggerated dance moves, but where it actually looks real - from David Gilmour, Stevie Ray Vaughn, Edward Van Halen, Joe Walsh, Jimmy Page, Mark Knopfler, Sammy Hagar, Eric Clapton, Carlos Santana, Richie Blackmore, to even Jose Felliciano, and anyone else in between, I become one with the air. If I've had too much to drink, the regular patrons at my favorite watering hole say I look mental when a good guitar song comes on the jukebox. How do I know all the notes? -they ask. I've practiced for 30+ years on my steering wheel or in my home in front of the mirror, in private of course. It makes me feel important, like I'm a rock star or something. I'm a gifted real musician as well, but on a trumpet.

@smileydog, that is great and all, but technical merit only gets you so far in an air guitar competition. The three areas that are judged on are, 1) technical merit 2) stage presence 3) airness. You got to have all 3 to advance.

Way to go! Amazing drummer, solid film critic, and apparently world's best air guitar player. Congrats! A great underdog narrative as well. What's not to like about this story?