Knute Pittenger, in costume as Shrek, the title character in Theatre Lawrence’s upcoming production, sits in the Theatre Lawrence seats with a stuffed Shrek toy Tuesday. Pittenger has been the lead actor in several Theatre Lawrence musical productions, a far cry from his day job as an employee for the city’s Water Department. “Shrek” opens Friday at Theatre Lawrence, 4660 Bauer Farm Drive, and runs through Dec. 22. 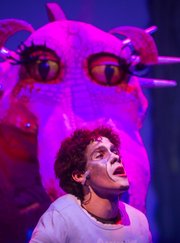 Donkey, played by Jake Leet, tries to escape from the dragon during a dress rehearsal for Theatre Lawrence's production of "Shrek."

No, it’s because he shares one important trait with his character.

“Donkey,” he says in a perfect Scottish accent in one of the show’s more famous scenes, “ogres are like onions. They have layers.”

Pittenger, a blue-collar veteran of the Vietnam War, he works for the city’s Water Department. He turns on service for new tenants, turns it off for those moving out and, often, tells delinquent customers to pay their bills so he won’t have to shut it off right then.

“I can be the Grim Reaper or their best friend,” he says. “They cuss at me when I have to shut it off, and they’re very happy to see me when I turn it back on.”

This month, there is a lot of turnover in apartments because of KU fall graduation. He spends much of his day shutting down service at places where a tenant is leaving and getting an initial reading on a meter for a customer just starting up.

Layers. Contained in that answer is a clue to whom he really is.

On a recent day, he stops in at a Dillons to collect water payments from the city’s collection box there. But he can’t leave without stopping to greet one of the employees. She participated in a store costume contest to see who could dress up the best as one of the guys from “Duck Dynasty.”

“Do you know if you won?” he asks her, convinced she looked perfect when he saw her in costume.

He takes a moment to share her frustration before he moves on to his next adventure, reading more meters.

His large, bear-like frame can look imposing, but it masks a gentle soul, a man who loves a Rodgers and Hammerstein song as much as a perfectly thrown touchdown pass.

Ask him about the Chiefs’ three-game losing streak, and he groans painfully. Mention KU’s football program, and he’s even more upset about the downward spiral of the last four years.

Is this a guy you would expect to find playing iconic roles at the local community theater?

“If I could do theater for a living, I would,” he muses.

Look at the list of characters he’s played over the last eight years at Theatre Lawrence, and it reads like a laundry list of coveted roles for male actors: The Beast in “Disney’s Beauty and the Beast;” Horton the Elephant in “Seussical the Musical;” The Old Man in “A Christmas Story;” Daddy Warbucks in “Annie;” Captain von Trapp in “The Sound of Music;” and now the title role in “Shrek.”

How does a blue-collar city worker end up in such an enviable position?

“Part of it is the stature,” he says. “When you’ve got a Beast in ‘Beauty and the Beast,’ you need a big guy. A lot of it is the visual. When you walk in (to auditions), do you look like the part?

“I pick roles that way. I go through the list of shows when the season (is announced) and think, ‘I can’t do that part, but maybe I could do that one.’”

It’s worked. Pittenger has played roles not only at Theatre Lawrence but also at Baldwin Community Theater and Topeka Civic Theater. He doesn’t get turned down often.

“Sometimes, you’d rather be lucky than good,” he says.

He keeps landing the parts every guy wants, but he stays humble. He considers himself fortunate and is mindful of his limitations.

“Another prerequisite for me is, ‘Do I need to dance?’” he confesses. “No? Thumbs up!”

But how did an everyday guy — a former soldier and a diehard sports fan — become so enamored of musicals?

“When I was a child,” he explains, “on Saturday, my brother and I couldn’t go out and play until we had our rooms cleaned. Mom would clean the house while we were working on our rooms, and she’d always put on an album. It was always a Broadway musical — ‘The King and I’ or ‘West Side Story’ or something like that.

“I kind of thanked my mom for making me stay in and listen to theater tunes.”

For his lunch break, Pittenger heads to Chipotle on Sixth Street. It’s busy, and there’s a line.

“How’s your day going so far?” he asks the worker when he finally makes it to the front, and he is genuinely interested. When she tells him it’s been stressful, he sympathizes.

“I find classical music calming,” he says later. “A lot of times, when I have to face angry people on collections calls, I’ll put on KPR just to keep me calm.”

And there’s something else he has in common with his character: a heart of gold. He has a tough job, but he hasn’t allowed it to jade him. He’s always interested in the next person he meets.

Knute Pittenger has more layers than an onion or, indeed, than his green-skinned alter ego. Starting Friday night, he’ll get to spend another holiday season exploding stereotypes by showing off one of his favorites.