Kansas University theater and film graduates Matt Hislope of Austin, left, and Josh Meyer of Los Angeles organized a pop-up artist colony in a renovated church at 10th and New York streets. They call the year-long project, which has attracted artists from across the country, the Pilot Balloon Church-House. 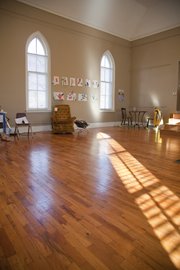 There's plenty of light and space for artists to work inside the Pilot Balloon Church-House, a pop-up artist colony inside a historic-church-turned-house at 10th and New York streets.

Just another day at Pilot Balloon Church-House? There’s probably no such thing.

The historic-church-turned-house at 10th and New York streets in East Lawrence is spending the year as a pop-up artist colony, where creatives from across the country stay a week or three and, basically, create whatever they want while here.

“It just seemed like the most fun we could have for a year, to come here and live in a historic church in Lawrence,” says Josh Meyer, who organized the colony with fellow Kansas University theater and film graduate Matt Hislope. “We’re calling it our year of 80 roommates.”

So far, roommates have included the artist who — hoping to conjure inspiration for a death metal interpretation of the play “’Tis Pity She’s a Whore” — spent a night in the church’s cold, cramped cinderblock cellar.

“He said it definitely affected his dreams,” Hislope says. “I think he was glad he did it.”

Another group of roommates walked in, threw open their suitcases, pulled out a bunch of flour and began baking bread.

Those were the Sin Eaters. They organized and filmed a grilled cheese sandwich eating contest, for which they collected confessions from Lawrence residents, wrote them on plates, then topped them with sandwiches stenciled with grilled-in silhouettes of each confessor’s face.

A recent afternoon found resident-of-the-moment Matt Chapman in one corner of the church’s large, airy living room strumming an electric guitar in preparation for a formal recording. Across the sparsely furnished room his wife, Molly Armstrong, was standing on a dropcloth and fashioning papier-mache masks on a newspaper-covered table.

The masks aren’t for any performance in particular. No deadline, no parameters, simply an opportunity to create — just what the Blue Lake, Calif., artists were looking for in Pilot Balloon Church-House.

“It sounded like a lot of fun, a great luxury for an artist to be able to have time and space,” Armstrong says. “It doesn’t come around very often that you can devote a chunk of time solely to your art.”

Chapman and Armstrong, physical theater artists who work a potpourri of day jobs on the side, are just back from three months in Denmark. Next, Chapman’s heading to Louisville, Ky., to teach comedy workshops while Armstrong’s returning to Blue Lake to make a new play before they move to a new place in the San Francisco Bay area.

They say Pilot Balloon Church-House has been a rejuvenating intermission.

Meyer and Hislope performed together at KU and reconnected in Austin, where they founded an experimental theater group called the Rubber Repertory.

Their idea for Pilot Balloon Church-House “bubbled up” around April and moved quickly, Hislope says. They launched an online crowd-funding campaign, met their goal, signed a lease on the church and spent a month taking applications from interested artists, the first of which moved in this summer.

Meyer says there’s a long history of artist colonies in the United States but that most were institutional, had their own funding and often required arduous applications.

“We could’ve filled two years very easily,” Meyer says. “There’s just such a need for this sort of thing that’s not being met right now.”

The project is going so well, Meyer and Hislope says, that they’ve even thought about replicating it in other cities.

Artists come from about a dozen states and a few foreign countries. Rather than planning formal shows here in Lawrence, most participating artists “are pretty much using it as a quiet retreat,” Hislope said.

And what church doesn’t open daily services with verse?

Not Pilot Balloon Church-House. One crowd-funding campaign reward was an opportunity to pick the poem or prayer to be read aloud in the house each morning. Meyer’s aunt nabbed that prize and chose this oh-so-apropos piece, “Pied Beauty” by Gerard Manley Hopkins, 1877:

Glory be to God for dappled things —

For skies of couple-colour as a brinded cow;

For rose-moles all in stipple upon trout that swim;

And all trades, their gear and tackle and trim.

Whatever is fickle, freckled (who knows how?)

He fathers-forth whose beauty is past change: