Who knew rabbits tasted this good?

Over the first 30 years of my life, I had never (knowingly) eaten rabbit. Then I visited Lawrence.

Earlier this year, I was in town for a job interview at the Journal-World, when some future colleagues took me out to lunch at 715. The menu was creative and exciting, but one thing that stuck out was the rabbit stew.

I consider myself an adventurous eater, so I decided to give it a try, not knowing what to expect.

When I got it, it tasted like … meat. Sweet, tender, white meat — not quite what I was expecting from the squirrely, rodent-like creatures my dog is always chasing.

In a sense, that lunch sealed my decision to move to Lawrence. It made me realize that, like the restaurant, this was a unique, quirky town, full of people open to trying new things.

I've since made rabbit a semi-regular part of my diet. When I see it on the menu somewhere, it's hard to pass up, since it's not something most restaurants serve.

But I got to wondering, why rabbit? And why don't more places offer it?

The answer, in part, can be found at a farm 30 miles east of Wichita. There, at the Rare Hare Barn, Eric and Callene Rapp raise rare, meat-breed rabbits that they sell to foodie restaurants, mainly in Lawrence and the Kansas City area.

Eric Rapp grew up around his grandfather's rabbit farm during a time when Americans seemed to have less of a problem eating the furry animals. But somewhere along the line, he said, Americans started thinking of rabbits more as pets, dooming the rabbit farming industry (Rapp calls it "the Easter bunny syndrome").

Then why did he start his own rabbit farm? 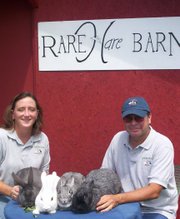 Courtesy of the Rapps

Callene and Eric Rapp of the Rare Harn Barn in Leon, Kan.

After reading too many stories about contaminated meat, the Rapps decided to raise their own livestock, including something Eric was familiar with from his youth: rabbits. Along the way, he started hearing from restauranteurs who had stopped serving rabbit because the quality of the meat wasn't what it used to be. He also learned that several meat breeds of rabbit were nearing extinction.

"You've got to eat them to save them," Rapp noted, fully aware of the irony. So he decided scale up his operation and start selling his product.

The Rapps now produce about 180 rabbits a month — and it's still not enough to keep up with demand. But growing any more might require giving up some of the quality control that comes with being a small-scale, family-run operation, Eric said. Most of the rabbit meat in the U.S. otherwise comes either from China or a large-scale processor in Arkansas. Local chefs say they wouldn't serve rabbit if they couldn't get it from a local, quality source like Rare Hare Barn.

So, how to describe the taste and texture of rabbit meat? I'd say it's a cross between chicken and pork, though it depends on the part of the animal you're eating and how it's cooked. In 715's rabbit ragu, the off-the-bone meat is sweet and tender; in Merchants Pub & Plate's rabbit cacciatore, the fried loin is tougher and meatier (though the latter restaurant's rabbit apple sausage appetizer may be the best rabbit dish I've had).

"One of the great things about rabbit is while it appears to be an exotic meat, it's very mild and flavorful," said Merchants chef T.K. Peterson. "It surprises people how flavorful and approachable it can be."

Local chefs note that the meat isn't cheap, so it helps to use the entire animal, which they do. And while rabbit might not be a moneymaker, it helps add variety to the menu, they say. It also has a higher percentage of meat than most other forms of livestock.

715 chef Michael Beard sears some rabbit on a recent day. Rabbit has been on the menu since the restaurant opened in Lawrence in 2009.

715 chef Michael Beard first started cooking with rabbit while attending culinary school in Italy, where, like other European countries, rabbit is more widely eaten than in the U.S. It's been on his menu since he opened 715 in 2009.

"I think more and more people are getting into it," Beard said as he cooked some chinchilla on a recent day in the downstairs of the Lawrence restaurant (he slow poaches the meat so it's more tender and thus more palatable to an American audience). "I'm just excited that more and more restaurants are using it." Other local establishments that have served rabbit at one time or another include Pachamama's, Genovese and the Eldridge Hotel.

Watching Beard prepare to cook rabbit, I saw the carcasses of the normally fluffy creatures waiting to be butchered. I concluded that consuming rabbit has also made me less of a hypocrite as a carnivore. Why should I feel bad about eating one animal over another, just because it's cuter and cuddlier?

From age 8 to 18 my family raised, butchered and ate rabbit. I learned early to just not name the bunnies. And to always be vigilant for snakes.