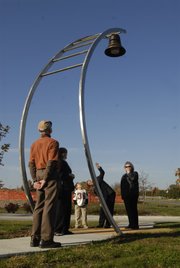 This 2007 file photo pictures the unveiling of "Beacon" at Fire and Medical Station 4, 2121 Wakarusa Drive. The sculpture, created by Gail Simpson and Aristotle Georgiades of Actual Size Artworks in Staughton, Wis., was commissioned by the city of Lawrence at a cost of $38,000 as part of the city's Percent for Art program.

Percent for Art in other cities

A few other area cities have Percent for Art programs, or similar public art funding efforts.

The so-called “hair curlers” atop Bartle Hall in downtown Kansas City, Mo., are among that city’s most recognizable One Percent for Art projects. Kansas City’s program allocates 1 percent of each city building project’s budget to the creation of original art connected to that project.

Topeka, Overland Park and Olathe currently do not have Percent for Art programs, city representatives said.

The Lawrence Cultural Arts Commission is asking the city to include an art project in the design of the new roundabout at Wakarusa and Legends drives.

The city’s Percent for Art resolution does not specifically apply to roundabouts. But arts commissioners agreed last week that the project meets the “spirit” of the resolution, which aims to create aesthetically pleasing environments in public places.

While the resolution’s open-endedness can be nice for adjusting its application on a case-by-case basis, some arts commissioners say it can also make it harder to get Percent for Art projects done.

Recommending clarifications to the resolution is likely to be a goal of the Cultural Arts Commission in the coming year.

A $75,000 Percent for Art project — a series of glass sculptures by artists Dierk Van Keppel and John Shreve — is part of the library reconstruction under way now.

The last time Lawrence completed a Percent for Art project was more than six years ago, according to a list from the city. A sculpture entitled “Beacon” was installed at Fire Station No. 4 in 2007.

Before that, projects ranging from $1,000 (a framed piece called “Cowboy, Cowgirl, Cowchild” at the Police Substation, 15th Street and Inverness Drive, 1988) to $100,000 (a trio of projects at the new Lawrence-Douglas County Health Facility, Third and Main streets, 1999) were done nearly every year or two since the city passed the Percent for Art resolution in 1986.

The resolution says the City Commission may set aside up to 2 percent of the cost of all capital improvement projects for the acquisition, purchase and installation of art in public places.

So projects like roundabouts and trails are in a gray area.

“What an exciting opportunity it would be to have public art on the trails,” arts Commissioner Grace Peterson said. “But they don’t fall under this.”

The roundabout, for example, isn’t a routine street improvement (not eligible) but isn’t exactly a park, either (eligible), Assistant City Manager Diane Stoddard said. The project wasn’t on the last capital improvements plan but was pitched, approved and will be designed before next year’s plan is adopted.

Work on the roundabout is expected to begin next year. The City Commission approved the project last month, and installation is expected to cost about $350,000.

The Cultural Arts Commission is in charge of recommending Percent for Art projects and selecting artworks, subject to approval by the City Commission.

What a swell idea! The roundabouts are bad enough. Now they want to ADD a distraction? I guess it all comes down to what you consider art?