A new year is just around the corner; a fresh start full of amazing possibilities. In a fit of nostalgia, I decided to take a look at my very first Bite Sighs recipe: a Yule Log cake. Since the original paid homage to vanilla, let’s see if we can come up with a chocolate version!

I’m a fan of chestnuts, so finding a way to pair them with cake seemed like the thing to do. If you can find ready-made sweetened chestnut puree, grab a can. Otherwise, you can make it at home using one of a billion recipes found online. Be sure to use fresh chestnuts, and roast them to bring out the flavor. 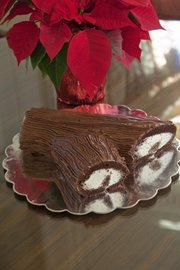 Heat your oven to 375 degrees and line a large sheet pan (12 inches by 17 inches by 1 inch) with baking parchment. Set up your faithful stand mixer and beat four large eggs on medium speed for about four minutes. They should be fairly foamy and a uniform light yellow color. All set? Good.

Pour in half a cup of milk, half a cup of water, one-third cup of vegetable oil, and a tablespoon of vanilla. Shake in a box of Devil’s Food cake mix, half a teaspoon of cinnamon, and a small box of dark chocolate instant pudding. Blend on low speed for 30 seconds, then crank it up to medium for another one and a half minutes, scraping the bowl now and then.

Reserve one and a half cups of batter to bake as cupcakes and spread the remaining batter in your prepared pan. Bake for 10 to 12 minutes; the top will feel springy when you poke at it. Dust a tea towel with powdered sugar and turn the cake out onto it. Peel away the parchment and carefully roll up the cake and towel together, starting from a long side.

Place the roll on a cooling rack so it doesn’t sweat all over your counter, and prepare the filling. Beat two cups of heavy whipping cream on medium-high speed until it starts to thicken. Add three tablespoons of cream sherry (totally optional) and the chestnut puree. How much? Depends on your taste. I used about three-quarters of a cup. Drop it into the cream by the spoonful, and keep beating until stiff peaks form.

Carefully unroll your cooled cake. It’s OK if it cracks a little; you can spackle it with frosting later. Spread the chestnut cream over the whole cake, right up to the edges. Reserve some to frost your cupcakes when you’re done.

Re-roll your cake. Cut off one quarter of the log at an angle and press it against the side of the longer piece to form a branch. Cover the whole thing with a light coat of your favorite chocolate frosting. Stir in a little more cinnamon, if you’re feeling adventurous. Scratch bark lines along the surface with a fork, add some plastic holly or a marzipan squirrel, and there you go. A new twist on an old favorite.