In a project he’s calling “Give Take Give,” Lawrence artist David Loewenstein is documenting the unusual gift economy and social community that have arisen around the trash bin behind the Social Service League Thrift Store, 905 Rhode Island St.

Lawrence artist David Loewenstein keeps a log of items he finds in the garbage container behind the Social Service League Thrift Store, 905 Rhode Island St. In a project he’s calling “Give Take Give,” Loewenstein is documenting the unusual gift economy and social community that have arisen around the trash bin. 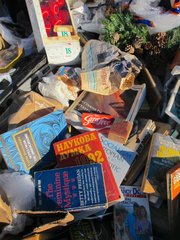 Christmas ornaments, a wreath and a variety of books were among items in David Loewenstein's Dec. 29 inventory of the trash bin behind the Social Service League Thrift Store, 905 Rhode Island St. His project documenting the mini-economy and community that's cropped up around the bin is called "Give Take Give."

'Give Take Give' exhibition

April’s Final Friday exhibit at the Percolator Artspace, 913 Rhode Island St., will center on David Loewenstein’s Give Take Give project.

The exhibit is expected to include a “show-and-tell” element in which community members who’ve found treasured items in the Social Service League Thrift Store trash bin share their experiences. An accompanying booklet will feature photos, essays and excerpts of interviews he’s conducted.

Over the past decade, maybe longer, the bin has evolved into its own unlikely circular micro-economy and a gathering place for both people who live comfortably and the down-on-their-luck. In a project he’s calling “Give Take Give,” Lawrence artist David Loewenstein is documenting the phenomenon.

“It’s unsupervised. There are no rules,” he says. “It’s those of us that use it that have to maintain it.”

Trash bin “community” members know the container as a prime spot to forage for interesting or useful things — and also a haven where they can leave things someone else might want or need.

Cast-off or broken items from the thrift store, at 905 Rhode Island St., go into the trash bin, Loewenstein says. But some donors drop their items in the trash bin instead of taking them inside, either because they arrive after-hours or just because they know someone will find them there.

Not having the soupy, smelly restaurant trash of many other downtown bins helps. There’s also a few unwritten rules.

“People know not to throw dirty garbage in here,” Loewenstein says. “For the most part, they understand this isn’t what this is about.”

Also, when trash bin diggers come across a great find they don’t need for themselves, they pull it to the top or set it on a nearby fence, in hopes it will get noticed. Sometimes electrically or mechanically savvy hobbyists pull out a broken item, take it home to fix, then return it to the bin for someone else to find and enjoy.

On a frigid-but-sunny afternoon in January, Loewenstein is curved over the bin — he won’t climb inside it, a personal boundary — with camera and note pad in hand.

Rifling through the top layers of stuff, he unearths a retro breakfast-in-bed table, lots of shoes in relatively good condition, a stick horse head with no stick, a toy police truck, a costume witch hat, a glazed coil pot — the list goes on and on. During this inventory, one of several he’s conducted since last summer, there’s one find he wants to keep: a piece of paper bearing colorful doodles and “Happy Mothers Day” in a child’s handwriting. It’s dated May 2000.

“The things that are most interesting to me are the personal things,” Loewenstein says.

They were undoubtedly valuable to someone at one time, he says, but even those things eventually get thrown away.

That’s probably true about most anything in the trash bin.

The Nov. 16 inventory had a lighter tone:

As Loewenstein digs, a neighborhood resident and off-duty store volunteer stops by to check out what’s in the trash bin that day. A woman dropping off donations inside the store walks over to see what’s going on. A guy no one knows offers everyone cigarettes (no takers).

That’s another thing about the trash bin: it brings people together whose paths might never cross otherwise, Loewenstein says — like hipsters hunting for treasures and poor people diving for items they need but can’t afford, or financially sound residents donating items and drug addicts wandering the alley.

When Lawrence resident and Kansas University graduate Rachel Vaughn began research for her doctoral dissertation on waste economies and "Dumpster diving," she expected to find only poor people scavenging the bin behind the Social Service League.

Vaughn says the Social Service League’s “little Dumpster that could” should be a point of pride for the community, not seen as shameful or gross.

Plus, she says, it may inspire answers to a larger question about public spaces and this country’s growing economy of waste: “How do we deal with this huge conundrum of creating stuff? And what do we do with it?”

Funding from the Rocket Grants program is fueling Loewenstein’s project. The grants — a partnership of the Spencer Museum of Art, the Charlotte Street Foundation of Kansas City, Mo., and the Andy Warhol Foundation for the Visual Arts — aim to support innovative, public-oriented work in nontraditional spaces.

“By shedding light on ... an alternate economy hidden in plain sight,” a Rocket Grant writeup says, “Loewenstein hopes to inspire others to reflect on how gifts of labor, teaching and time can help bind people together in a connected circuit of goodwill.”

Loewenstein’s home and studio are within a block of the thrift store, and he’s long considered doing a project on the trash bin but worried publicity might change its dynamics.

When the city approved plans for a multistory hotel to go up at Ninth and New Hampshire streets, in the empty lot across the alley from the bin, Loewenstein decided he shouldn’t risk losing his opportunity.

“The hotel’s going to dramatically change the environment. There’s a good chance this won’t even be accessible anymore,” he says. “I thought I’d better capture it while it’s still here.”

I think the Journal World once reported the idea of having a "freecycle" day where all across town folks could put stuff out on their curbs/alleys and give and take at will. It could be a great, festive event that could even make Lawrence a destination for that day.

There are other countries who do a much better job of making re-use of unwanted items than the US. Seems to me that we need to see the opportunity to re-use the same way as we view weatherizing your home: they both reduce waste and save you money!

There are currently two "free-cycling" events in Lawrence. The Free Sale has been going on for about 15 years and happens in the fall. The Free Market is in the spring. Not sure how long that one has been around.

That is essentially what happens on "moving day" around August 1. It would be cool to make it official.

great thought douglascounty, we could take a day and focus on recycling in its purest form and kudos to mr. lowenstein for bringing this to our attention

Now this is great alternative journalism.

people on my street just put things out on the street and watch them disappear; I usually try to do it after the trash pickup, so they won't just get trashed, but generally things go away within the day...clothes, dishes, furniture, books, jewelry, gardening stuff, books...

I do that as well except by the alley. I had a 40 year old avocado green gas stove from my kitchen I hauled out and it was gone in less than two hours.

Curious what the official or unofficial line is on the legality of this dumpster situation. About 5 years ago I stopped at this VERY dumpster behind the SSL on a summer evening to poke my head in and see what was in there. Cops pulled up behind me, questioned me, told me it was illegal to dumpster dive, and said if they saw me again they would ticket me. I'm guessing they're not so hard about this, at this point??