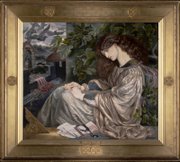 Photo courtesy of the Spencer Museum of Art, Kansas University

Visitors to the Spencer Museum of Art may notice one of its leading ladies is missing. She’ll return, though, after an important East Coast mission.

Dante Gabriel Rossetti’s “La Pia de' Tolomei” — one of the Spencer’s most famous and popular paintings — is on loan to the National Gallery of Art in Washington, D.C., which is featuring it in a landmark exhibit. The National Gallery is billing “Pre-Raphaelites: Victorian Art and Design, 1848-1900,” which opened Sunday, as the first major survey of the art of the Pre-Raphaelites to be shown in the United States.

"The Pre-Raphaelites rejected the rigid rules for painting that prevailed at the dawn of the Victorian era to launch Britain's first avant-garde movement," National Gallery director Earl A. Powell III said in a news release. "We are thrilled to present this rare exhibition to our audiences and grateful to lenders, both public and private.”

“La Pia” was the last major canvas completed by Rossetti, who lived from 1828 to 1882, according to information from the Spencer. The dramatic portrait, measuring roughly 3.5 by 4 feet, depicts a pensive, seated woman with rippling auburn hair and a billowing robe.

Her story is a sad one.

The Spencer’s description adds that the painting’s heavy-hearted theme was especially poignant for Rossetti, who was in love with the model — Jane Burden Morris — even though she was married to his fellow artist and good friend, William Morris.

“La Pia” will return to the Spencer after May 19, when the National Gallery exhibit closes.