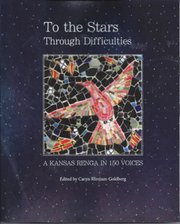 “To the Stars Through Difficulties: A Kansas Renga in 150 Voices” (Mammoth Publishing, 2012).

“Acorn’s Revenge” by Skyla McCollum, which will also be on display at the Percolator's Make Love exhibit that will celebrate love in all its forms. McCollum says the piece “illustrates the lack of love between an acorn and a squirrel.” 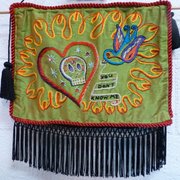 “You Don’t Know Me,” an embroidery piece by Kelly Nightengale, is one of the “ridiculous to profound” pieces of arts that will be on display at Make Love exhibit at the Percolator, 913 Rhode Island St., for this month’s Final Fridays event in Lawrence.

If anyone understands that, it would be Kirkendall, who has been putting creative people together at the Final Friday Art Party for more than two years at the Hobbs Taylor Lofts building, 718 New Hampshire St. Groups of talented individuals seems to be a theme of this month’s event.

“A renga is a longer form of the Japanese haiku,” says the book’s editor, Caryn Mirriam-Goldberg, who is also the current Kansas poet laureate. “It’s one poem written in many voices.”

Poet Denise Low, who contributed to the renga, and who will appear at the Art Party, says the book includes work from professionals to beginners.

“Each poet begins with the seed of an idea from the poem before, writes, and leads the way for the next poet, all the way to the end,” Low writes in her blog. “The result is a unique chorale of beauty and surprise.”

Other surprises await those who venture over to the Percolator, 913 Rhode Island St., where you will find “everything from the ridiculous to the profound,” says Rachael Perry, co-curator of Make Love, the show celebrating love in all its various forms.

Perry expects that the gallery will be brimming with works that celebrate “intimacy, sensuality, sexuality, heartbreaks and heartmakes” — in other words, all of the pain and pleasure associated with loving others. Perry is pleased with the response she has received from the community after the call for work.

“So many different kinds of people are submitting works that illustrate their experiences with love,” she says.

In addition to visual pieces on display Friday night, visitors can create valentines and listen to the various bands who will perform beginning at 7 p.m.

The Percolator is also the place to be Friday if you have your eye on gaining the affections of a special someone. Kelly Kearns, who works in the wellness department at the Merc, will be on hand with love potions.

“They’re actually pusangas,” she says. “Peruvian love juices created and used by shamans from that country.”

VIM at the Arts Center

After you and your loved one have been smitten by the works at the Percolator, step over to the Lawrence Arts Center, 940 New Hampshire St., from 5 p.m. to 9 p.m., for a new show, VIM, by four regional artists: Ben Ahlvers, Archie Scott Gobber, Lisa Lala, and Kent Michael Smith.

Like its title suggests, the show centers on vigor and vitality.

“All of the artists touch on the theme of energy whether it is the use of color or their mark making,” says Ahlvers, who is also exhibitions director at the Arts Center. “That was the foundation of the show, but another element is that everyone involved is younger. They’re artists just starting off on their careers and are on a trajectory.”

The four individuals are the featured artists for this year’s benefit auction April 13, and selected works from this show will be available for purchase at the auction.

“We’re trying something a little different with the auction this year,” Ahlvers says. “Rather than having one artist well known in the local community, we have several artists who may not be known around here. This show will introduce Arts Center folks to these artists, as well as introducing the Arts Center to people who may follow these people. We will be getting the Arts Center out to the folks in Kansas City and beyond.”

"Tree squirrels are one of the most important animals for helping oaks spread, and regenerating second-growth oak forests. During the autumn and winter months their main diet consists of nuts and seeds--usually acorns." - science

“illustrates the lack of love between an acorn and a squirrel.” -pretentious "artist" grasping at straws to fit the love theme