A look inside the Spencer's "Empire of Things"

The Spencer Museum of Art's new permanent exhibit, “Empire of Things,” explores the concept of collecting through an opulent gathering of art objects ranging from 2,000 B.C. to the modern era, some of which the museum has never before displayed. The exhibit is the latest step of Project Redefine, the Spencer's ongoing effort to reinstall its permanent galleries in new, more theme-inspired ways.

Photo courtesy of the Spencer Museum of Art

"Empire of Things" at the Spencer Museum of Art includes art objects from a variety of time periods, regions and mediums. Here, "Mary Magdalene," left, by Bernardino Ludovisi, and "Bust of a Woman," by Henri Jacobs, are pictured in front of Gillis van Tilborgh's painting, "A Picture Gallery." 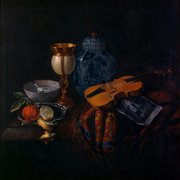 Photo courtesy of the Spencer Museum of Art

"Still-life with Violin and Engraving of Arcangelo Corelli," a circa-1730 Dutch painting, is among artworks featured in the Spencer Museum of Art's "Empire of Things" exhibit. A display of blue-and-white ware, decorated in the style of the pictured ceramic vessel, is expected to be installed in a case next to the painting.

They’re like mirrors reflecting the people who gave them to us, the places we've been and what we perceive as beautiful, valuable or useful. And they don't exist in vacuums, as most are fashioned after similar things and displayed alongside yet more things.

In museums — where artworks traditionally are isolated by time period, type or region and lined up in one-way-only galleries — those connections fade away.

The Spencer Museum of Art's newest permanent exhibit, however, aims to put things back in their place.

“Empire of Things” explores the concept of collecting through an opulent gathering of art objects ranging from 2,000 B.C. to the modern era, some of which the museum has never before displayed. The exhibit is the latest step of Project Redefine, the Spencer's ongoing effort to reinstall its permanent galleries in new, more theme-inspired ways.

“It allows us to break down barriers within our collections,” says Kate Meyer, assistant curator of works on paper. She adds, the hope is for visitors to think, “Hmm, I've never thought about these together before.”

“Empire of Things” opened this month in Gallery 401, although the exhibit is still a work in progress. Museum staff will continue adding pieces over the next couple of months until the installation is 100 percent complete.

“Things from across time and space can have dialogues,” says Kris Ercums, curator of global contemporary and Asian art.

The exhibit’s lynchpin, so to speak, is Gillis van Tilborgh’s circa-1660 painting, “A Picture Gallery,” depicting several well-dressed men in a salon covered floor-to-ceiling with paintings — a collection of art.

• “A Chat by the Fireside” by Jean-Léon Gérôme, a French artist known for his Oriental scenes. Near the painting — recently back home at the Spencer after being on loan for a Gérôme exhibit at Paris’ Musée d’Orsay — rests a centuries-old Persian bowl with a blue and turquoise pattern strikingly similar to that of Gérôme’s fireplace. A yet-to-be-filled case next to the painting will display other “exotic” art objects.

• A show-stopping 10-panel Chinese screen, given to the Spencer by Olathe native Charles (Buddy) Rogers and his wife, the former Mary Pickford, both Hollywood stars. The screen frames a home-like grouping including an Irish side table, an African tribal stool and a Persian rug.

• A juxtaposition of architectural landscape paintings and stone architectural fragments, from ancient Egyptian to intricately carved details from a Topeka bank building.

• Joseph Highmore’s richly colored oil portrait of Anneta Pelham, an Englishwoman in Turkish-inspired dress no doubt linked to her husband Thomas “Turk” Pelham’s job business as a merchant in Turkey, curators explain. Mrs. Pelham looks right at home next to the ornate gilded mirror and candlesticks flanking her in the exhibit.

Things are excellent lenses for viewing historical phenomenons such as global trade (think of Mrs. Pelham's outfit) and inspiration (Gérôme’s Oriental scenes), Meyer and Ercums say. They also reflect changing tastes of the collectors that purchased them at one time or another, presumably simply because they liked them (such as the Chinese screen).

Rather than a one-way street, “Empire of Things” is installed more like a home, where groupings of furniture and objects — many uncovered, at eye level — invite you to meander.

That’s on purpose, the curators say. The exhibit is meant to be explored and navigated at one’s own pace and whims.

That’s one of exhibition designer Richard Klocke’s charges. He’s custom designing and building a floor-to-ceiling piece of furniture based on the items curators want to display, which will be grouped on shelves illuminated with a fiber-optic lining and displayed in secure, pull-out drawers.

The cabinet should reflect the exhibit’s overall focus.

“Part of the idea is to give the viewer the excitement of seeing a lot of special things at once,” Meyer says. “There’s still a fascination of, ‘Look at all that stuff!’”