Doug Hitt, left, Lisa Grossman and Jake Vail have collaborated on the book “A Kansas Bestiary,” which features essays and watercolors on 15 native Kansas animals. Proceeds from the sale of the book will go to the Kansas Land Trust. 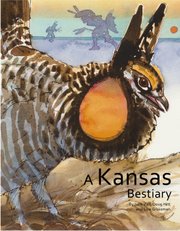 A greater prairie chicken appears on the cover of “A Kansas Bestiary.” 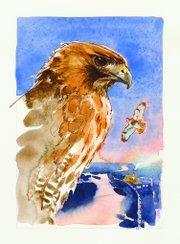 An illustration of a red-tailed hawk, published in" A Kansas Bestiary." 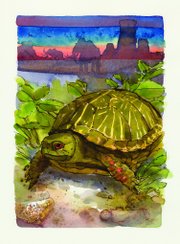 An illustration of an ornate box turtle, published in "A Kansas Bestiary."

It was a sound Doug Hitt, and anyone who’s been in Kansas in the spring, had heard before, even if he’d never really thought about it.

But once he learned that the “preep! preep!” was the call of the boreal chorus frog, he could no longer hear it without thinking about where it was coming from.

“Once you key into it, a whole world opens up,” Hitt says.

This is the sort of connection to Kansas’ natural world Hitt and his friends Jake Vail and Lisa Grossman hope to spur with their new book, “A Kansas Bestiary.”

That third word (pronounced “best-ee-airy”) refers to a tradition dating to the Middle Ages. In Medieval Europe, a bestiary was a guide to the beasts that populated the land, featuring colorful illustrations and interspersed with Christian theology, fantastical myths and moral lessons. Alongside entries on the badger or deer might be others on mermaids or unicorns.

Like its European ancestors from 800 or so years ago, this Kansas bestiary is no encyclopedia. But that doesn’t mean it didn’t require painstaking work to produce the essays and watercolor illustrations devoted to 15 different creatures native to the state.

Hitt, Vail and Grossman are three friends who live or work in Lawrence, with a common interest in nature and conservation. Hitt is a physical therapist, Vail a librarian and Grossman an artist.

The idea for this project came to them more than two years ago after they came across a bestiary for California.

“We thought every state should do one of these,” Vail said.

Since then, they’ve been working to put together their own bestiary for their home state.

First they had to decide what beasts to include. Would they settle on the state’s traditional wildlife symbols, such as the ornate box turtle and western meadowlark? Or would they search for lesser-known creatures?

After taking nominations from scientists, they settled on a mixture of both. It’s a mix of animals that “say ‘Kansas,’” Vail said.

The box turtle and meadowlark are in there. But they chose the regal fritillary butterfly over the more famous monarch, because it depends on Kansas’ tallgrass prairies. And instead of using the generic “grasshopper,” they identified one out of dozens of Kansas species: the two-striped slant-faced grasshopper, which chews on grass and isn’t a pest to farmers.

That one came per a suggestion by a scientist at the Konza Prairie Biological Station in the Flint Hills, Valerie Wright.

“We thought we might just deal with grasshoppers as a group,” Hitt said, “and that was blasphemous to Valerie.”

Once they’d settled on their 15, they did as much as they could to get to know them. They consulted with scientists at the Konza station, Kansas University and elsewhere. And they saw them in person, wherever they could.

“We made a concerted effort to get out there and know these guys,” Vail said.

Grossman, who painted the watercolor illustrations, especially tried to get as close a look as possible.

She wasn’t sure how she could do that with one of the animals, the cougar. But she found out the Topeka Zoo had two of them. She visited on a February day as snow fell, with no one else around, and watched as they came within a whisker’s length of the glass separating her from them.

“It was just very powerful to be able to photograph and experience those creatures,” Grossman said, “and I never really thought I would.”

In the finished product, Grossman’s watercolors connect elements of Kansas’ past and present. A gopher snake lies on a gravel road as an approaching car kicks up dust and wind turbines dot the horizon. But behind a box turtle are the silhouettes of woolly mammoths, backlit by a sunset.

The essays, by Vail and Hitt, ponder the creatures and their connections to Kansas and its people. They include evolutionary details vetted by scientists, as well as passages by Walt Whitman and Henry David Thoreau, stories from American Indian traditions and anecdotes from their encounters with the animals.

The book notes that the badger’s painted face, like those of skunks and raccoons, is an example of something called “convergent evolution.” But it also conveys a personality: “Cross me, and you’ll rue the day you were born,” it says.

The authors credit a number of other groups for help. The Douglas County Community Foundation’s Elizabeth Schultz Environmental Fund supported it with a grant, through the Kansas Land Trust. Lawrence’s Allen Press printed it this past week using recycled paper and soy-based ink. Numerous knowledgeable people chipped in, including the late Kansas Wildlife Author Laureate Joe Collins.

Proceeds from the book, which costs $15.95, will benefit the Kansas Land Trust, which aims to conserve significant lands in the state. Hitt and Grossman are both members.

“The work that they do is so intricately connected with what our passion is,” said Ginny Moore, the Land Trust’s executive director.

Copies are available at The Merc, 901 Iowa St., and the Raven Bookstore, 8 E. Seventh St., in Lawrence, and people can request copies by mail by emailing kansasbestiary@gmail.com. It’s available now only in a paperback edition, but a hardcover will be available in the spring.

The authors said they hope readers will sense the connection among Kansas’ animals, its landscapes, its past and its people. Key into that, they say, and a whole world may open up.

This story has been corrected to reflect which 'Kansas Bestiary' authors are members of the Kansas Land Trust.