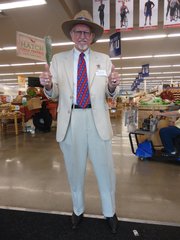 Clothing details: shoes, don’t remember where, 30 years ago; suit, Kohls, three years ago; tie, a customer gave it to me for my birthday, two years ago; hat, gift from my daughter, four years ago. 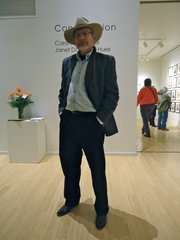 "This is your job?” is the question I’m most frequently asked when I interview someone for Style Scout, a Q&A column in the Journal-World that features Lawrence’s most fashionably (or interestingly) dressed.

“Yes, this is my job,” I say with a smile, trying to remain fully present with this person while also maintaining a subtle survey of the street, trying to spot the next stylish person I’ll just so happen to “run into.”

“How do you do it?” is the next most frequently asked question.

I probably do it a lot like you would:

Most of the time, you’ll see me zigzagging through crosswalks, creating the quickest route possible, guessing which way the person is going to turn before he or she does. And then, after I’m sufficiently out of breath and sweaty, do I casually intersect the person I’m scouting and ask, “Excuse me, ma’am/sir — have you ever been in Style Scout?”

And it never fails that their eyes search my entire face questioningly for about three seconds before saying, “Nooooo?”

There are, in my estimation, three subsets of people I scout. There are Lawrencians I’ve seen around town for years, Lawrencians I’m encountering for the very first time and out-of-towners that, for some reason, seem to catch my eye.

The first subset of people includes, most notably, Chuck “Colonel” Benedict. After too many trips to Hy-Vee without more than a “hello” to Chuck, the greeter, I shamelessly used my Style Scouting façade as an excuse for a conversation. After his feature ran, he called me to tell me that he had received many compliments, and he sent flowers to my work. Gentlemen everywhere, please take note.

And then there’s those Lawrencians whom I have the honor of encountering for the first time. People like David Brown, an attorney in town, who ambivalently answered my questions with charisma while at the same time, asked, “Why me? Why me?”

The last subset of people — the out-of-towners — includes people like Rhonda Swade and Matthew Paige, two of my most favorite scoutees. Rhonda is the mother of Josh Swade, the director of the “There’s No Place Like Home” documentary about James Naismith’s original basketball rules. Matthew Paige is a touring musician whose feathered cap I spotted from a block away.

Style Scout is a simple and fun piece, but for me, for a mere five minutes, I get to be entrenched in a person’s everyday life.

We exchange tidbits about each others’ lives, and, for five minutes, I get a peek into the different parts of what makes this community tick. It almost makes being stood up worth it.

— Ali Edwards can be reached at go@ljworld.com.

The Style Scout articles about women feature a wide range of ages and styles.

The ones about men, however, are almost exclusively 20-something hipster types in their skinny jeans and dress t-shirts. (The two gentlemen in this article are the only exceptions I can recall in the last couple of years.)

One can certainly tell where Ali's head is when she's sitting downtown ogling the lads.

You caught me, clovis. Though, I have to say, the "20-something hipster type" is largely indicative of Lawrence's overall style.

Another confession: Before reflecting on the men I've scouted over the past year, I never realized how much men wearing hats charmed me.

Ali...I'm out there...look for the following style: Very late 30s Info Tech Sellout....the ball is in your court.

Thin_mint, I'll have my eye out. However, I'll have to find you in the next week, as I'm stepping down from Style Scout at the end of January. It has been a blast, but my days are calling me to spend them in less fashionable ways.

Largely indicative of Lawrence's overall style if you are 20-something.

You always have a nice range of ages and fashions in the women you select, but just as a older woman is not going dress like a 20-year-old, neither do older men.

You may, however, have a hard time finding them hanging around downtown because, well, they have jobs. Real jobs in something other than retail or food service.

But I'm glad you have begun to fancy hats, although these two gentlemen have way too much brim for my tastes.

thin_mint -- You heard her -- Get a hat. A pork pie would go well with info tech sellout. And be sure to tip it when you approach the stood up lady drinking latte on the bench.

Aw, Ali, why are you stepping down?

Hey, Cleo! I'm taking on a few new projects so I need to let a few old ones go. Besides, this gig is way too awesome for me to selfishly hold onto.

Is it normally between 8-5 M-F? That itself it kind of limiting. I would think be out and about on a Saturday afternoon or a Final Fridays night downtown or over at the arts district around 8 pm would turn up a very interesting range that isn't quite as limited. Overall, it certainly has been a fun feature though!