Please add your piece to the display, but don't cross the line

The Lawrence Arts Center's ceramics artist in residence, Monika Laskowska, has her end-of-year solo exhibition on view through July 27. The exhibition includes small clay sculptures made on site by visitors, in the foreground, and plates and other works crafted by Laskowska, background.

There are two entrances to Monika Laskowska’s solo ceramics exhibition at the Lawrence Arts Center.

Walk in from one side and encounter a table inviting you to be part of the exhibit. Plastic-wrapped balls of clay are accompanied with a message: “Please take one.” A table with chairs is labeled, “Please make something.” A floor-to-ceiling wall of see-through cubbies instructs, “Please add your piece to the display.”

Enter from the other side and see a wall of intricately decorated, expertly crafted and symmetrically hung plates that are “Not for sale.” A triptych of eye-level panels coated with bark- and feather-like leaves of fired clay says, “Please do not touch.” The label on this side of the cubbies reads, “Please do not cross the line.”

This is a purposeful juxtaposition by Laskowska, who says she wanted to highlight both the open-ended layout of the gallery as well as the irresistibly tactile nature of clay — to touch or not to touch?

Laskowska is the Arts Center’s 2012-2013 ceramics artist in residence and has taught classes there since last summer. Her residency’s finale is the solo exhibition titled “Give-and-Take: A participatory display of objects that one need not, cannot, or does not wish to give specific names to."

The exhibition runs through July 27, with an Insight Art Talk by Laskowska scheduled for 7 p.m. July 18 at the Arts Center, 940 New Hampshire St.

There are 256 cubbies in the center of the room. Less than a week after the exhibition opened with a Final Friday reception, more than three-fourths were filled.

Students participating in a Lawrence Arts Center summer camp visit Monika Laskowska's solo exhibition there. Laskowska, the Arts Center's ceramics artist in residence, included an interactive side in which viewers are invited to create and display their own clay sculptures.

Eli Jost, 15, at left, and father Jerry Jost of Lawrence mold balls of clay into sculptures during Friday's opening reception of a solo exhibit by Monika Laskowska, the Lawrence Arts Center's 2012-2013 ceramics artist in residence.

Laskowska hadn’t before seen an in-gallery, interactive ceramics exhibit before. Would anyone participate? What would they make? What would she do with all the objects afterward?

“To me it’s such an obvious thing to do with clay,” Laskowska says. “It’s such a tactile material.”

Overhearing a girl at the opening say “it just feels so good to touch the clay and make something” reaffirmed Laskowska’s idea.

Professional artists and small children alike have contributed. Sculptures range from small, squished blobs (perhaps the work of a toddler?) to an elaborate, lifelike peapod, complete with tendrils curling into the next cubby (Laskowska confirms this was a professional).

Some pieces purposely fill the display space, like a star-shaped figure with outstretched arms and tiny hands that curl over the edges of the frame. Some are recognizable, like cartoon characters SpongeBob SquarePants and his friend, Patrick Star. There are flowers, faces, small abstract vessels and even a pretzel etched with the words “DREAMS OF GLUTEN.”

Laskowska says viewing the objects as a group is a different experience than viewing them individually. She’d like to photograph and catalog each one before the show ends.

“They’re just so precious,” she says.

Laskowska isn’t sure what she’ll do with them after the show but notes that until clay is fired, it can be reconstituted and recycled into new projects. Especially because some of the pieces aren’t assembled in a way they could be fired, she’s considering a reconstitution ritual that the public could view.

Craftsmanship defines the opposite side of the gallery, where Laskowska has molded clay into various textures that are extremely tempting to feel — even though the subtitles and the formal display mean even children know better. 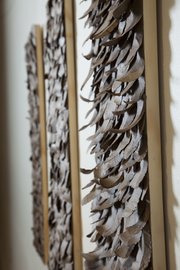 The Lawrence Arts Center's ceramics artist-in-residence, Monika Laskowska, has her end-of-year solo exhibition on display through July 27. These textured panels are featured with the inscription, "Please do not touch." 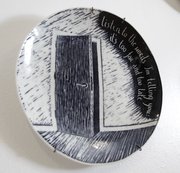 In her year-end solo exhibition, Lawrence Arts Center ceramics artist in residence Monika Laskowska explores the concept of home through a series of plates, each inspired by a different person who influenced her during her year in Lawrence.

One piece, entitled “The space off center that allows function,” is large, bulbous and curvy with a tunnel in the center. Shallow depressions from Laskowska’s fingertips cover the surface, appearing supple but actually hardened in the firing process.

The triptych on the wall is jagged, with paper-thin leaves of clay overlapping, fluttering and curling away from the wall.

The 28 plates reflect a continuing theme in Laskowska’s work: home, a place that, for her, is always changing. Laskowska grew up in Poland and has lived in Bulgaria, Ireland and, most recently, Columbus, Ohio. After her residency in Lawrence, she says, she’s considering moving to London.

Each plate was made for a person who has been instrumental for Laskowska during her year in Lawrence — people who fed her, befriended her, worked with her, invited her to their home for holidays or otherwise inspired her.

“The whole community, I felt, embraced me from day one,” she says.

To Laskowska vessels, such as plates, are reflective of offering, nourishing and the domestic sphere, making them a perfect canvas for the project. And the plates are as varied as the people who inspired them.

There’s a nubby, chartreuse green plate textured using molds Laskowska created from hedge apples — something she’d never seen before coming to Kansas. A friend who made Laskowska laugh by describing how much she loved to eat frozen peas as a child inspired a plate scattered with green spheres and the saying, “I eat my peas with honey. I’ve done it all my life...” “Soft Landing,” a billowing plate created in Laskowska’s signature “paper clay” style, is named for a Lawrencian who reached out to her almost as soon as she arrived — he spoke Polish.

Unlike the participant-made figures, Laskowska knows exactly what she will do with the plates. She'll give them to those people who, for her, made Lawrence home.