American Indian artist draws on modern views of her people 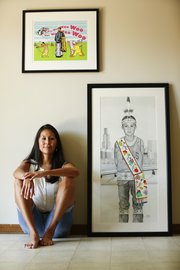 American Indian artist Jodi Webster believes it is important for an artist to have the ability to work in multiple mediums. Above is a screenprint titled "I'm Not That Kind of Indian." At right is a drawing titled "Wabansi: Lakeside Chicago-Beyond Swag." Webster is pictured Tuesday, July 9, 2013, in her Lawrence home. 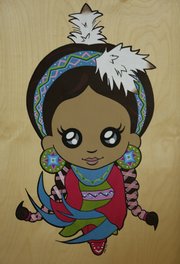 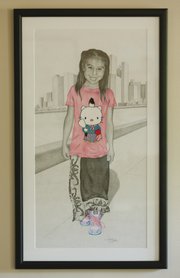 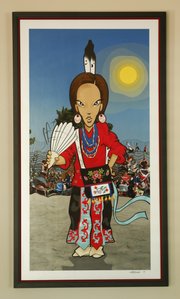 "90 Degrees with a Chance of Attitude," by Jodi Webster.

Jodi Webster’s art seeks to portray American Indians in a way she says can be hard to find: the way they really are.

Indians aren’t always standing in a field in full ceremonial regalia. And they definitely aren’t running around with their hands in front of their mouths yelling, “woo, woo, woo, woo, woo.”

“This is who I am,” she says. “And this is just a way of showing you all this diversity that’s in these tribes.”

Webster, a Lawrence resident who expects to graduate from Kansas University this fall with a bachelor’s degree in drawing and painting, is starting to get some traction in the Indian art world, highlighted by an upcoming artist’s residency at the Santa Fe Indian Market.

More than 150,000 visitors and hundreds of artists are expected to attend the annual market, organized by Southwestern Association for Indian Arts. Webster, one of two artists chosen for residency fellowships, will spend August and September in Santa Fe interacting with and learning from other artists while pursuing her own work.

Especially for an artist who usually creates at her kitchen table — when she can get her husband, two kids and pet Chihuahua out of the way — the residency is a welcome opportunity.

Webster, a Ho-Chunk and Prairie Band Potawatomi Indian, grew up in Wisconsin, homeland of the woodland Ho-Chunk people.

While most of the other Indians there lived in the country, Webster’s family was one of only a handful living in town, Wisconsin Rapids. Her family was poor, she says, and racism was prevalent — she remembers white kids taunting her with those “ugly” woo, woo, woos.

“The art was one of the things I could kind of revert to, because it doesn’t take a lot of money to create my artwork,” she says. “It was a really good escape, a good way to center myself.”

Some of Webster’s pieces are more serious than others.

A small, multi-colored screen print titled “I'm Not That Kind of Indian” depicts a woman in traditional — and accurate — Ho-Chunk dress surrounded by feather-headdress-wearing, woo-woo-ing cartoon characters. She loved cartoons as a child, and still does, but remembers the sting of seeing the characters she was so fond of making fun of her heritage. In another piece, she comments on a planned mining operation by showing Indians harvesting wild rice in the traditional way while wearing gas masks.

Some juxtapose old with new in a lighthearted way.

Some of Webster’s work is less of a statement and more of an embrace; she’s especially passionate about the bright colors in traditional costumes.

“Fancy Dancer,” a stylized dancing figure repeated in different colors, captures the traditional garb’s vibrant colors and the stamina it takes to perform in hot sun and heavy costumes.

John Torres Nez, chief operating officer of the Southwestern Association for Indian Arts, says the 92-year-old Indian Market traditionally has focused on Southwestern art. Leaders are now trying to diversify and attract artists like Webster from other regions.

"They bring an aesthetic that is different from the Southwest," he says.

Torres Nez says the residency, a partnership with the Santa Fe Art Institute, enables artists to focus on their work, interact with other artists and soak in Santa Fe's rich art culture with an extended stay in a city that could otherwise be cost-prohibitive.

After the residency and finishing her undergraduate degree, Webster says, she’d like to pursue a master's. Her goal is to continue making art that helps celebrate her people and break stereotypes.

“It’s important for me ... to show my children that if I’m really into something, if I’m talented, to take that as far as I can," she says.