A cool treat on every block

Forecast for a meltdown: temperature pushing 100 degrees, no cloud cover, zero percent chance of rain, all day in the sun, tired feet, fighting crowds, and realizing someone already got those half-price shoes you had your eye on.

Is there an antidote?

Something cold is a good start.

Here’s a list of some of Massachusetts Street’s best heat-beating treats for today's sidewalk sale. There’s at least one for every block, so you have options no matter where you are when you feel a meltdown coming on.

Bonus: Most are even portable so there’s no need to stop shopping. Except maybe to recover from brain freeze. 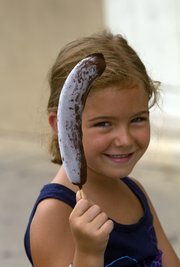 A whole frozen banana in a thick — and also frozen — chocolate shell. This treat comes on a stick, making it appropriate for eating-while-walking. (Warning: The banana is top-heavy and the stick spindly, so save that plastic bag to help get a better grip. Ours broke and fell on the sidewalk right after we took the photo. Don’t let this happen to you!)

The Hawaiian shaved ice at Mass Street Sweet Shoppe is the real stuff. Unlike a simple snow cone, it’s made with a machine that shaves the ice from a single block for a fluffier result. Choose from three sizes and 30 colorful flavors.

The Siberian, one of the featured adult milkshakes at the Burger Stand, 803 Massachusetts St. The shake is made with Kahlua, chocolate vodka and vanilla ice cream.

First the bad news: You can’t get these to go. The good news: The reason for that is because they contain alcohol. Right now Burger Stand’s featured shakes are The Siberian (Kahlua, chocolate vodka, vanilla ice cream) and the Ice Cream Alexander (brandy, creme de cacao, vanilla ice cream, nutmeg). The bartender can also whip up a concoction with your choice of liquor.

General manager Chris Hoffman warns that large amounts of alcohol and dairy don’t always make for happy tummies, so these concoctions are best in moderation.

“We don’t recommend more than two,” he says.

Backup: Self-serve frozen yogurt at TCBY, 845 Massachusetts St. There’s a lot of flavors and a lot of toppings — go crazy.

Somehow, a bottle of soda from Europe seems so much more chic. Au Marché and Brits have coolers with a variety of imports, including citrus-flavored San Pellegrino and Almdudler Lemon Herb Soda at Au Marché and elderflower spring water and a variety of ginger beers at Brits.

Backup: Italian Cream Soda at Minsky’s Pizza, 934 Massachusetts St. Choose from strawberry, raspberry, cherry, kiwi or vanilla. For a skinny version, have them hold the cream. 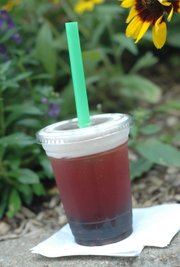 Asian bubble tea is like a refreshing drink and a snack in one. It’s served with a big, fat straw for sucking up the little black tapioca balls along with the tea. Choose black or green tea, then your favorite flavor — there’s everything from taro to lychee, with milk or without.

Backup: A waffle cone with a scoop (or two) from Sylas and Maddy’s Home Made Ice Cream, 1014 Massachusetts St. A downtown Lawrence classic.

This chilled emerald-green drink is made from the root of the khus plant, an aromatic grass that’s native to India and known for its cooling and soothing properties. The drink tastes minty, vegetable root-y and sweet all at the same time.

Backup: If khus root sounds too exotic for you, grab a Mango Lassi or cold Masala Chai instead. Curry in a Hurry has all three.