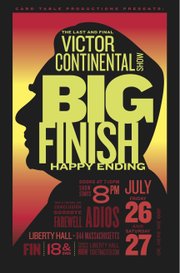 Victor Continental: Big Finish, Happy Ending will be Friday and Saturday with 8 p.m. shows each night at Liberty Hall, 644 Massachusetts St. Tickets cost $12-$25 and are available through the Liberty Hall box office, Ticketmaster outlets and Ticketmaster.com.

It’s a reflective time for the cast of the Victor Continental Show. Though they’ll miss performing the naughty live sketch comedy, musical and theatrical production so many Lawrencians look forward to, they agree it’s time to close the curtain. The LAST Victor Continental Show: Big Finish, Happy Ending will be held Friday and Saturday at Liberty Hall, 644 Massachusetts St.

Several core members of the cast, many of whom have been with the show since the beginning, recently talked about the birth of the show, when they were a bunch of ambitious 20-something theater students with a shoestring budget and a dream.

Jeremy Auman recalls a brainstorming session with his childhood friend and college roommate Will Averill back in 1998.

“Big Joe wanted to do a tent revival,” Paul Rosen cuts in. (Fans of the show know that Big Joe is emcee Victor Continental’s bodyguard.)

“We wanted to be clean,” Kari Jackson says. “No cussing... Did we think of ourselves as highbrow?”

“Yes,” Averill says. “We wanted to be witty and clever and do things without swearing, which is ironic given the way things turned out.”

There’s some disagreement about who came up with the name Victor Continental, but Kitty Stephens is positive she’s the one who said it first.

“That’s where the show got its late start,” Will says. Their budget was about $100 and the dressing room was the alley out back. The girls created Busby Berkeley-style gowns from fabric, cardboard, glitter, dingle-balls and tinsel. At first they thought they’d take turns playing the part of the show’s namesake host. But after that first performance, everyone was in agreement: Jerry Mitchell was Victor Continental.

“I wanted to do something exotic,” Mitchell says. “I decided to grow a goatee and sideburns and dye my hair black.” He then slips into Victor’s trademark not-quite-identifiable accent: “It’s kind of a cross between Tony Montana from ‘Scarface’ and Serge from ‘Beverly Hills Cop,’” he says, prompting a burst of laughter from the cast.

“I don’t think I’ve ever heard that,” Jackson says.

When the Varsity became Urban Outfitters, the cast had the even more ambitious goal of playing Liberty Hall. Building an audience took a few years, but they were persistent.

“I remember going to Tim (Griffith) to talk to him about booking the theater as a stand-alone act and he didn’t think we could do it,” Auman says. The now deceased Griffith, longtime manager of Liberty Hall, agreed to show movies up until 9 p.m. so that the cast could book the stage for a reduced price.

“He really was our big benefactor,” Auman says.

What started out as a cast of about 20 people and a miniscule budget has grown into a cast of about 30 and a budget of $10,000. A good number of the cast serve as producers and writers, and though they’re always friends, there is wrangling over which sketches get cut and which ones are kept. Still, Stephens says that as a female member of the cast, she’s always felt everyone is treated equally.

So why end a still-popular, sell-out show? The cast cites getting older and family demands.

“It’s a lot of work,” Jackson says. “Now that we’re all older and have other responsibilities…”

“It really is a monster,” Auman finishes.

“I just don’t know how 15 years has gone by so fast,” Jackson says.

I am well over 12 years old and love every show I've gone to. You don't go to a comedy show to raise your IQ, you go to laugh and be entertained. This show has always more than provided that and I will miss being there each year. Also the cast and writers are a great bunch of people!

I hope they go out on a high note. Along with the now disappeared comments, I was disappointed in the last show.